Doctor Who 50th Anniversary: The Lazarus Experiment By @Paul_Bowler 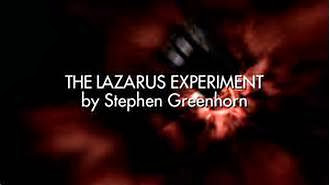 Doctor Who:
The Lazarus Experiment
By Stephen Greenhorn
Reviewed By Paul Bowler

" Ladies and gentlemen, I am Richard Lazarus. I am seventy six years old and I am reborn!"


The Doctor (David Tennant) and Martha (Freema Angyeman) return to present day London, the TARDIS materialises inside Martha’s flat, only a few hours after she first met the Doctor and stepped into to the TARDIS. After listening to a message from Martha’s mother, Francine (Adjoa Andoh), telling them that her sister, Trish (Gugu Mbatha-Raw), is on TV, they watch a news report about the elderly Professor Lazarus (Mark Gatiss) who says he has made a startling discovery that will change what it means to be human. 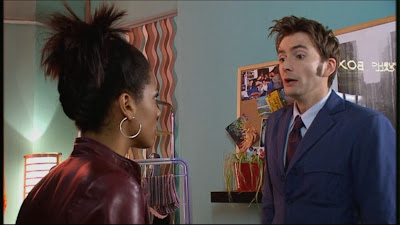 Having changed his mind about leaving, the Doctor accompanies Martha to the launch party, where also Trish works, where they meet up with Francine and Martha’s brother, Leo (Reggie Yates), before watching Professor Lazarus as he steps into his machine. Suddenly, the machine begins to run out of control, forcing the Doctor to intervene and stop the device overloading. Professor Lazarus emerges from the machine, his DNA completely rejuvenated, now a much younger man. The Doctor has doubts about the process, so remembering they had a DNA sample after Lazarus kissed Martha’s hand, they sneak off to the Professors lab to analyse it, where they are concerned to discover the sample is indeed fluctuating and highly unstable. 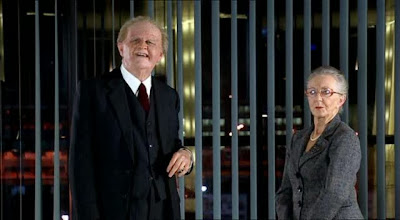 Professor Lazarus leaves his guests and returns to his private office with his partner, the elderly Lady Thaw (Thelma Barlow), but things turn nasty when he spurns her advances and she threatens to get Mr Saxon the experiments funding. Enraged, Lazarus suddenly transforms into a horrific scorpion like creature and kills her. After returning to his human form, having drained the life from Lady Thaw to stabilize his DNA, Lazarus returns to the party and lures Trish up to the roof. Fortunately the Doctor and Martha discover Lady Thaw’s dried out corpse and get to the roof in time to save Trish from Lazarus before he changes again.

With the monstrous Lazarus creature in hot pursuit, the Doctor gives Martha the sonic screwdriver so that she can use it override the buildings security systems and help Trish get the guests safely out of the building. Meanwhile, the Doctor is hunted by Lazarus, where he eventually ends up trapped inside the Professors machine with Martha, who returned to help him. The Doctor reverses the polarity of the machine and turns it against the monster, apparently making Lazarus human again. The Police and ambulance arrive to deal with the emergency, but Lazarus becomes a monster again, and he quickly escapes. The Doctor, Martha, and Trish track him down inside Southwark Cathedral, where the Doctor makes one last effort to reason with the Professor, but he becomes a monster again and turns on them. The creature chases Martha and Trish into the Bell Tower, giving the Doctor time to reach the Cathedral’s pipe organ, where the intense sound waves disrupts the creatures horribly mutated DNA and subsequently causes Lazarus to fall to his death, Afterwards they see that the Professors crumpled body has reverted back to its normal, elderly, human form. 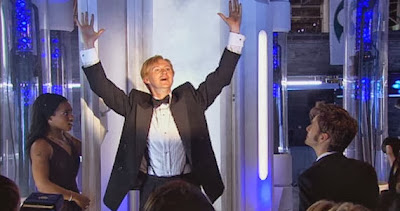 Back at Martha’s flat the Doctor offers to take Martha on one more adventure in the TARDIS, but she wants to be more than just a passenger, and refuses. The Doctor relents, saying she means much more to him now, he agrees with her, and together they leave in the TARDIS for their next adventure. As the TARIDS fades away, Martha’s mother leaves a message on her answering machine, and warns her daughter about the Doctor…

The Lazarus Experiment (2007) is the sixth episode from the third season of Doctor Who, staring David Tennant as the 10th Doctor, and Freema Angyeman as his new companion, Martha Jones. This is a really good episode that sees the Doctor and Martha return to the present day, providing the perfect opportunity to get to know more about Martha and her family. The Doctor also gets a chance to wear his dinner jacket again when they attend the launch party for Lazarus’ experiment, and it quickly becomes apparent that Martha’s mother is very suspicious of the Doctor - for reasons that will become much more apparent later in the season. 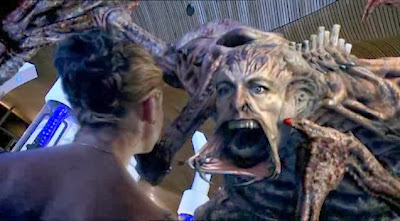 David Tennant and Freema Angyeman are excellent as the Doctor and Martha. After losing Rose the Doctor seemed very reluctant to grant Martha full companion status, saying that her travels in the TARDIS would only be for a short time. Now after all their adventures, its clear just how much Martha is beginning to mean to him, although he is still reluctant to get too close to her, as he is still getting over Rose’s sudden departure. The Doctor begins to give Martha a lot more responsibility as well, trusting her with the sonic screwdriver, and in the final battle with the Lazarus monster in the Cathedral. I really like how Martha stands up for herself at the end of the story, telling the Doctor how she is not prepared to be a passenger any more.

Mark Gatiss also gives a terrific performance as Professor Lazarus, a man who ultimately becomes consumed by his own experiment. The makeup used for the elderly Lazarus is really convincing, which makes transformation by the machine all the more startling, when he emerges from the device as a younger man. The Doctor notes that the experiment is very similar to the Time Lord regeneration process, indeed, it seems to restore Lazarus to his youthful self, but the Doctor’s suspicions are confirmed when the professor becomes a monster. It’s interesting how Mark Gatiss plays Lazarus, especially after he becomes young, where the character is visibly repulsed by his former companion, Lady Thaw, and instead turns his lecherous attentions to Martha’s sister, Trish. Lazarus is driven to feed on the substance of others to maintain his own DNA, his sudden change in personality is quite disturbing, its as if the machine has exemplified the darker aspects of his mind as well as his body. 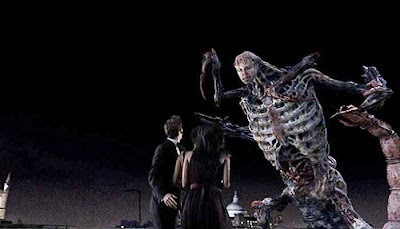 The story by Stephen Greenhorn rattles along at a breakneck pace, with the action hardly letting up for a moment once the Doctor and Martha arrive to watch the experiment. Drawing influences from such films as The Fly, and the 1953 TV series The Quatermass Experiment, director Richard Clark crafts a superbly creepy tale, especially the final showdown in the Cathedral where the mutated Lazarus falls to his death. Indeed, the special effects used to bring the Lazarus creature to life are superb, and really help build the tension as the monster rampages after the Doctor and Martha. 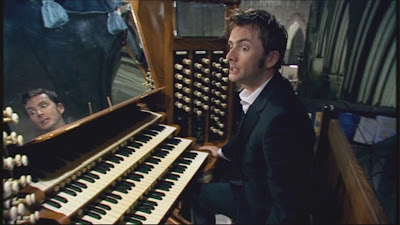 The Lazarus Experiment is a brilliant story, featuring some amazing special effects, and with great performances from the cast, it remains one of my favourites from this season. We also get hints about the mysterious Mr Saxon in this episode as well. A very traditional Doctor Who story from beginning to end, full of nail biting action, The Lazarus Experiment is a real highlight of the third season.
Posted by DR5WHO at 10:25 AM