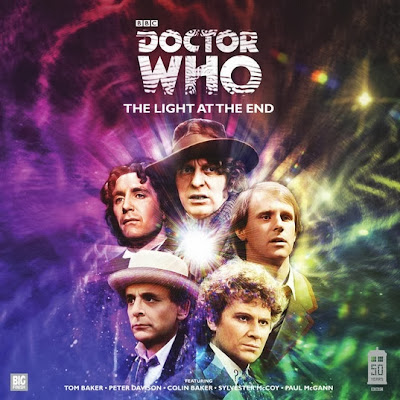 In a surprise announcement from Big Finish their 50th Anniversary Story The Light At The End has been released early for download and the pre orders have already begun to ship on all the versions. This is a celebratory story featuring all 8 classic Doctors as the go up against the Master.  This is a highly anticipated story and the rush of fans going to the site to download it has caused Big Finish's servers to crash.  You can order all the versions at the link below.
http://www.bigfinish.com/ranges/released/doctor-who-50th-anniversary

It's also a day that sets in motion a catastrophic chain of events which forces the first eight incarnations of the Doctor to fight for their very existence. As a mysterious, insidious chaos unfolds within the TARDIS, the barriers of time break apart…

From suburban England through war-torn alien landscapes and into a deadly, artificial dimension, all these Doctors and their companions must struggle against the power of an unfathomable, alien technology.

From the very beginning, it is clear that the Master is somehow involved. By the end, for the Doctors, there may only be darkness.