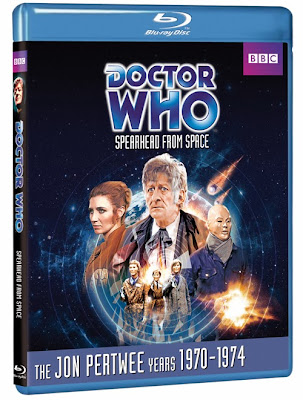 Doctor Who was shot primarily on videotape for it’s whole run of episodes, including up to date with the new series.  Up until just recently the videotape was a standard definition quality.
http://en.wikipedia.org/wiki/Image_resolution 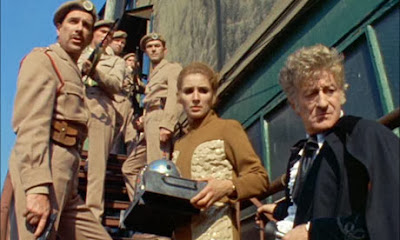 A strike at Television Centre in 1969 kept the story of “Spearhead From Space” out of the studios and the usual video recording method and so it had to be done on location in 16 mm film.  This really did not change anything for the broadcast other than viewers can see that the entire story is film as opposed to both film and video which is quite common during this time period.  Most location shooting was done on film and was edited together with the video tape done in the studio.  Spearhead was shot fully on location and hence 16 mm.  The quality of 16 mm film is higher than standard definition video and so a conversion to HD can take advantage of improved quality while no other classic Doctor Who story can. 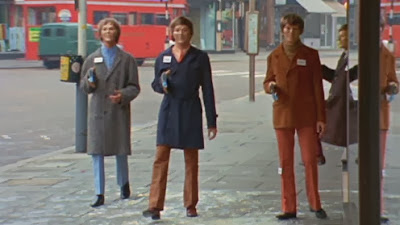 This is the only classic story that can benefit from a Blu-ray release although one could argue that Blu-ray releases  of all Doctor Who in the U.S. would be slightly better quality because the HD would maximize the resolution of the 625 lines that the UK standard use.  In the US the max is 525 and so the quality would be a
little bit better on HD but not much.

Anyhow, “Spearhead From Space” benefits greatly for Blu-ray and one can see instantly with this release.  Right away you know you have never seen a classic episode look this good.  Since the entire story was shot on location the viewer does not have to worry about dodgy sets and effects from the studio.  The story relies on pure cinema and the performers in the serial.  The locations are perfectly seen with luscious green trees and grass and superb buildings and factories.  Visually “Spearhead From Space” is excellent .

There is a fair amount of grain that might be because of the quality of film used.  This link goes into some great detail behind the making of the HD transfer but also includes a comparison photo of the SD vs HD print and one can see the grain. 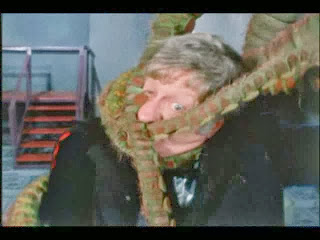 16 mm is not the best film and other series like Space: 1999 and Star Trek were filmed on 35 mm which benefits from HD conversion even more so.

The blu-ray of “Spearhead From Space” is well thought out and includes a few extras including retrospectives on both Caroline John (Liz) and Jon Pertwee (the Doctor).  These are excellent, if not a bit sad, looks at both these artists and their lives before and after Doctor Who.  The other extras includes some HD footage of the opening titles and a comparison of the SD and HD versions. 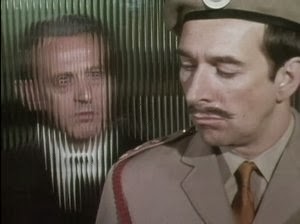 The story itself is pretty good.  I for one love location shooting and the production crew did an excellent job.  I did realize that as I was watching this first Auton story that the second one, "Terror of the Autons" is especially better.  Apart from just a few shots in "Spearhead From Space", most of the more memorable scenes were in "Terror of the Autons".  I found myself looking for the scene of the policeman Auton, the plastic chair and even the horrible doll and realized quickly that those were all scenes in "Terror".  Still, "Spearhead" has some great stuff and Jon Pertwee quickly makes the part his own.