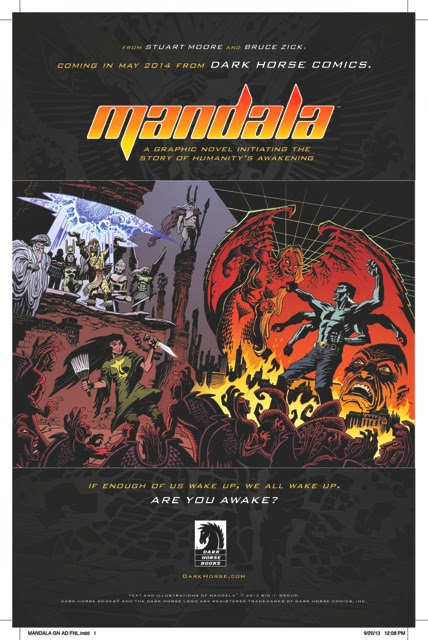 NEW YORK, NY, OCTOBER 9—New York Comic Con is still a full day away from opening its doors to the public, but we’re keeping the announcements coming! Today, Dark Horse premieres Mandala, an upcoming OGN written by Stuart Moore (Web of Spider-Man, Conan: The Mask of Acheron), with art by Bruce Zick (Thor)!

The earth—here and now. Humankind is secretly enslaved by a global mind-control cage called the GRID. Mike Morningstar and his spiritual spec-ops unit, known as “The Thirteen,” must alter time and take down the GRID before it’s too late. As fiction meets reality, the Thirteen need your help if they are to succeed in awakening humanity and changing the future. Are you awake?
“Mandala is probably the biggest-scale epic I’ve ever worked on: a saga of original sin and possible redemption that spans millennia and crosses the timelines,” said writer Stuart Moore. “At its core, it’s the story of Michael Morningstar, a guy who—like many of us—has to find his way in a world he doesn’t quite understand. The characters’ alliances shift constantly, along with the timelines.”

Artist Bruce Zick continued, “It’s been a total blast working on a project that brings together the diversity of world mythologies and stirs it all up into a cosmic, sociopolitical, crazy gumbo gestalt that just might make the reader ask themselves if they are truly awake.”