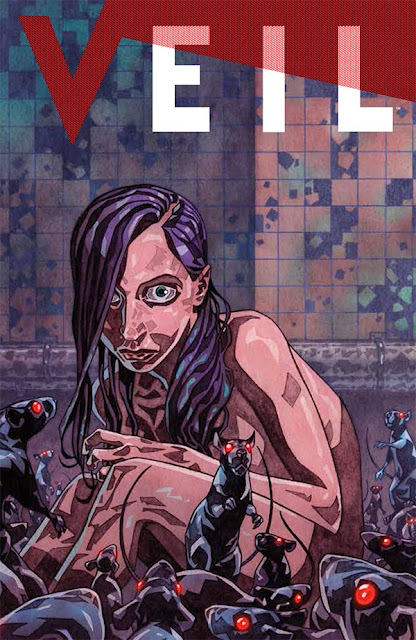 NEW YORK, NY—It was announced officially on Dark Horse’s horror panel at New York Comic Con that Greg Rucka would be bringing his latest heroine to Dark Horse in the new series Veil!
The story opens when a beautiful girl wakes up in an abandoned subway station with no memory of how she got there. When men try to hurt her . . . they wind up dead. Where did she come from? And what is she capable of?

This new series, drawn by Toni Fejzula, comes as the perfect addition to a heroine lineup that includes Buffy the Vampire Slayer, Ghost, and Serenity’s River Tam. Dark Horse is proud to introduce comics’ next leading lady!

“I’ve been tossing the idea behind Veil around for over a decade, seriously, but it wasn’t until Scott Allie pulled the string on it that it came to life,” said writer Greg Rucka. “It’s a very different kind of tale for me, very different in what I’m trying to accomplish, and working with Dark Horse, working with Toni, is a rare opportunity to try to bring this thing to life. The opportunity Dark Horse is providing us is amazing.”

“There are a lot of characters in comics that are very dangerous, and a lot that bring danger with them wherever they go. Veil gives that concept a whole new and very deadly meaning,” said Dark Horse’s editor in chief, Scott Allie. “I don’t know if I can classify her as an antihero. But she’s a character that’s going to surprise you in a lot of ways. Greg does gritty urban drama like no one else, and here he’s adding to it some things you’ve never seen from him before.”