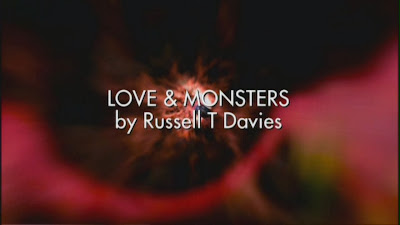 Elton is filming a video log of how he met The Doctor and what meeting The Doctor meant to his life.  He ends up searching London and actually runs into him battling a creature in a warehouse.  Elton goes on to tel about how he was there when The Autons invaded, when the space ship hit Big Ben and when the Sycorax ship appeared.  His looking for The Doctor has him meeting up with others how have the same experience.  They end up forming a group and call themselves LINDA. 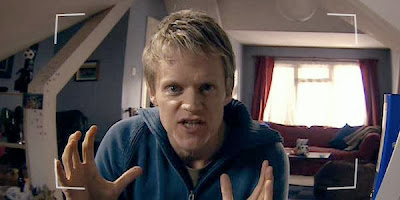 They are soon visited by Victor Kennedy and he is their salvation.  He has info on how to find the Doctor and tricks the group into finding him.  One by one the group is disappearing and they are not even answering their cell phones.  Elton and Ursula soon discover that Victor is not all who seems to be as he is in fact The Absorboloff and he has absorbed the other members of LINDA.  After absorbing Ursula he is after Elton and hopefully The Doctor shows up and save him. 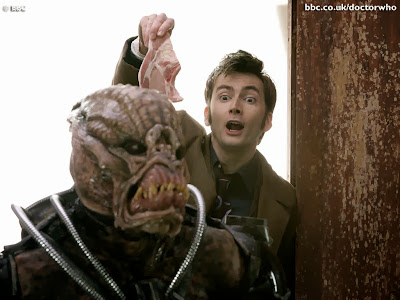 What utter crap. That phrase is appropriate to sum up Lave & Monsters by Russell T. Davies in a single phrase without using any expletives.  This episode is truly in the mode of such classics as “Delta and The Bannermen”, “Timelash”, “Time –Flight” and “The Space Pirates”.   Unfortunately those stories are classics compared to “Love & Monsters”.   I’ll give RTD credit for trying something new but unfortunately I did not care for it very much. 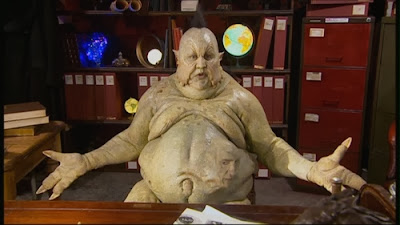 First off The Doctor and Rose weren’t in all that much as this was the Doctor lite episode and those were not really a favorite of mine, except “Blink”,  but when they do make an appearance they seemed out of character and not really acting a we have known them to.  They were more of a pantomime of their characters.  Especially Rose when she confronts Elton about upsetting her Mom.  Well Elton was about to absorbed by the Absorbaloff and all Rose was concerned about telling off Elton.  That scene did not make any sense to me at all. Save Elton first and then tell him off. 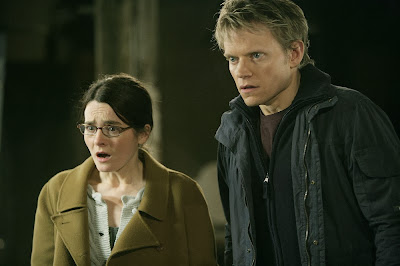 I think Love & Monsters would have benefitted if The Doctor and Rose were not in it at all.  It would have been more enjoyable to see Elton and LINDA fight off the Absorbaloff.  That would have been something different and not all that bad as the silliness would have worked with those characters and not Rose and The Doctor.  Myself I did not care for the silliness as it just seemed really stupid in parts and The Doctor and Rose came off as morons and that’s not what they are.  An example was the Scooby Doo tribute there that just did not seem to work at all and was not funny either. 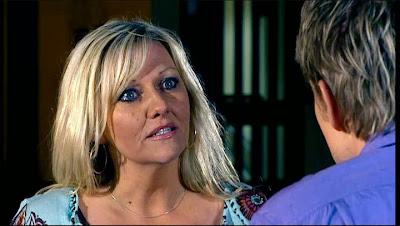 There were some good aspects to “Love & Monsters”.  I liked how they developed Jackie’s character.  You get to see a different side of her that we wouldn’t normally get to see.  We actually see what she gets up to while Rose is traveling and in a sense you start to feel sorry for her as she explains she is always being left behind.  Plus I liked the Electric Light Orchestra songs that were included like Mr. Blue Sky, Turn to Stone and Don’t Bring Me Down.  Those songs made it tolerable to watch Love & Monsters but not much.  For some reason the music seemed to fit in with the action and silliness going on.  This was also the story that was centered upon a Blue Peter design a monster contest.  The Absorbaloff was actually not a bad creation for the show but unfortunately the story was utterly poor.
Grade F