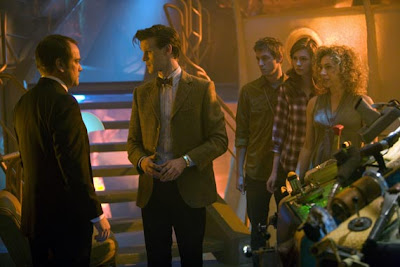 November 24th at at 8PM on BBC America will be the date for the 11th and final chapter in the Revisited series and of course this one focuses on the current Doctor, but not much longer, Matt Smith.  They will also be showing the Series 6 opener The Impossible Astronaut and Day of the Moon. Press release below.

BBC America celebrates the Eleventh Doctor, Matt Smith, in a new special of Doctor Who: The Doctors Revisited. Smith first stepped into the TARDIS in 2010 and will leave the series after starring in the 50th Anniversary Special on November 23 and regenerating in the Christmas special. The Doctors Revisited begins with Matt Smith, Jenna Coleman (companion Clara Oswald), lead writer and executive producer Steven Moffat, among others, examining the human side of this Doctor and taking a look at how all the years he has lived have affected him. The special is followed by the Eleventh Doctor story The Impossible Astronaut and Day of the Moon.