Doctor Who 50th Anniversary: The Sound of Drums/The Last of the Time Lords 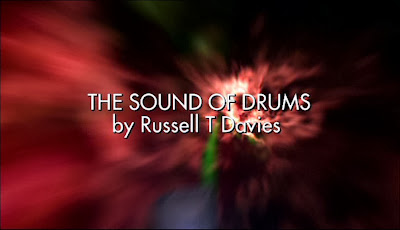 Doctor Who:
The Sound of Drums/The Last of the Time Lords
By Russell T. Davies

Another classic confrontation between The Doctor and The Master their first in the new series and its not like the ones we have been accustomed to before.  It is sort of like the type of confrontations that the Third Doctor and Master used to have during the Seventies.  This time The Master is Prime Minister of England and has all the powers available to him to make The Doctor and Martha and her family fugitives of the state.  The Harold Saxon umbrella story comes to a head in the finale as all the clues where in place since The Runaway Bride and if you did not figure them out well then too bad it was subtle but pretty obvious. It was pretty obvious how the story would start and the resolution of Utopia’s cliffhanger as The Doctor fixed Jack’s Vortex Manipulator and get them back to present day.  It’s good to have a former Time Agent as a friend.  Which lead up to a pretty good reveal that The Master was in present day all along as The Master duped The Doctor and everyone in the UK.  Just seeing the look of horror and surprise on the hero’s faces was priceless and then the realization that they soon are now wanted fugitives was a pretty good twist. 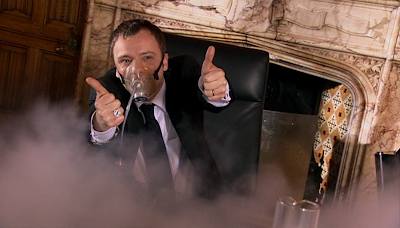 The first part of the story was really good and moved at a quick pace setting everything up for the concluding episode.   The mystery surrounding the Toclafane was pretty good and what they had to do with The Master was a pretty good mystery that had a pretty shocking reveal and tied up the loose ends of Utopia pretty well.  The Cliffhanger was pretty good as we see The Doctor defeated and aged as The Master got the upper hand by taking out Jack with a laser screwdriver and was able to age The Doctor by using the tech that Lazerus was working on.  Then when the sky opened up and the Paradox Machine went into effect and all the Toclafane came pouring out of a crack in the sky killing the humans was pretty intense and a pretty good cliffhanger with Martha looking on after escaping the Valiant and The Master. 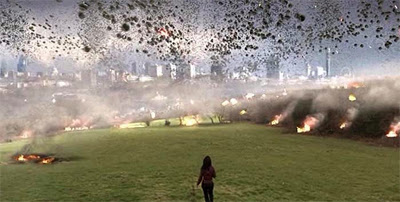 What was cool about the Toclafane was that they were human. The same humans that The Doctor loves and save over again are now killing each other.  It turns out that they are the humans trying to get to Utopia and The Master turns them into the cold hearted killers the Toclafane.  I thought that was a cool plot twist carried over from Utopia and kind of freaky considering humans were killing their past ancestors. 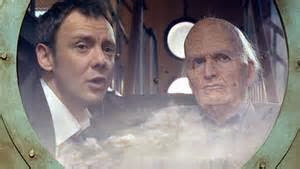 Russell T. Davies puts a new spin on The Master. Gone is the goatee and the black body suit and unfortunately gone is the serious nature of the guy.  As a fan of John Simm I thought they would make him a lot more dangerous and threatening but instead they make him unstable and erratic with a hint of his past evil coldness and calm.  I guess they tried something different but the silliness of The Master was just way over the top and I blame RTD for this and not John Simm as fans of the UK version of Life on Mars would attest to.  Hopefully if  the Master returns in the Moffat era he will be a tad more grounded. 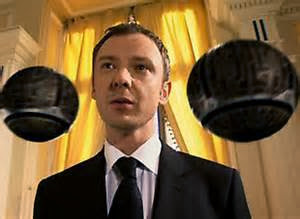 These two stories in my opinion were very entertaining and everything you have come to expect from a Russell T. Davies series finale including the reset button.   Put that aside and the way The Doctor comes back to his present age with the human power and making him an angelic Jesus like angel which at the time was cool and emotional emphasizing the human spirit but it just made The Doctor seem all powerful and godlike which he really isn’t.  That part just did not do it for me and was disappointing. 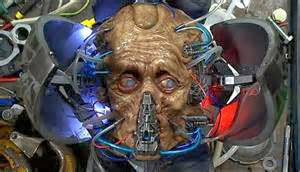 I did like the alternate future story with Earth being ruled by The Master and having Martha be the center piece.   It was good to finally see her being used properly and saving The Doctor for a change.  Speaking of Martha I loved her farewell from The Doctor and standing up to him and giving him a piece of her mind.  He did treat her rudely during her tenure on the TARDIS and always being on about Rose.  So good for her to tell him how she really felt.

David Tennant put in another good performance as The Doctor and also playing him as an old man.  It was similar to The Leisure Hive and Tom Baker being aged to an old man in that classic story.  The second time they aged him and put The Doctor in the birdcage was pretty stupid.  With The Master looking at him in the cage was similar to Sylvester the cat looking at Tweetie Bird in the Looney tunes cartoon.  It did look that way to me. 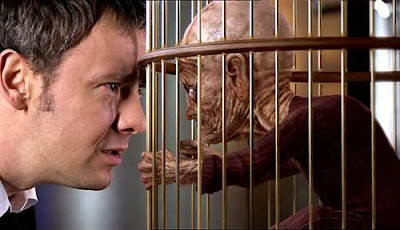 While The Sound of Drums/The Last of the Time Lords was not the best series finales it was entertaining and did have some good moments but was let down by the conclusion. It was also let down by the way they decided to make the Master be like even though he was much sinister in The Sound of Drums.   Unfortunately this series finale falls short of being spectacular but it wasn’t all that bad and is pretty entertaining.
Grade B-
Posted by DR5WHO at 12:39 PM

Email ThisBlogThis!Share to TwitterShare to FacebookShare to Pinterest
Labels: 10th Doctor, David Tennant, doctor who, Doctor Who 50th Anniversary, The Sound of Drums/The Last of the Time Lords