Doctor Who 50th Anniversary: Daleks In Manhattan/Evolution of the Daleks 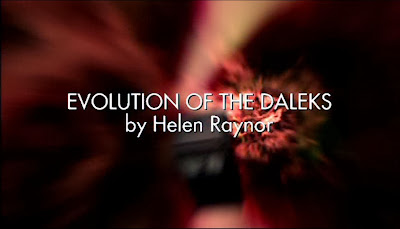 Doctor Who:
Daleks In Manhattan/Evolution of the Daleks
By Helen Raynor

The Cult of Skaro is in 1930’s New York City using the construction of the Empire State Building as a means to return to dominance.  The Daleks are using the building as a receiver to help power their new army of Daleks.  It appears that the sun is going to be discharging a massive solar flare and the brunt of the energy will be heading to New York City in the form of lightning storms.  The Dalkes in turn will use this energy to awaken their army of human’s that have been imbedded with Dalek DNA in them.  This will in turn be the new Dalek army. 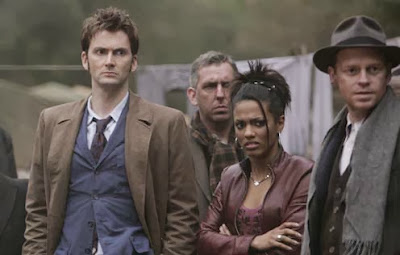 The Doctor and Martha stumble upon this when they investigate the sewers on NYC that center around a theater.  They are horrified when they see the pig mutants running around. What is worse is that The Doctor sees that the Daleks have combined themselves with a human in essence becoming a human Dalek.  This plan of theirs must be stopped and it is up to The Doctor and Martha to come up with a plan to stop this new Dalek uprising. 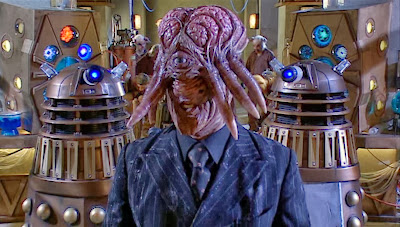 I really do not like this Dalek story at all.  In fact I think it is the worst Dalek story of new Who with Victory of the Daleks coming in a very close second.  I just do not like it and well it has to do with the human Daleks and Dalek Sec bonding with a human.  Props for doing something different but it just did not work for me.  I thought it was stupid and the Dalek mutant on the actors head just looked like a Halloween mask.  It just did not work and the way human Sec spoke was pretty hilarious. 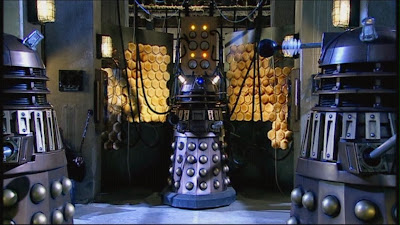 The way the Daleks were planning on reviving the human Daleks was straight out of Frankenstein.  From the raising of the tables to the lightning striking the Empire State Building was purely homage to the classic story.  It was pretty cool seeing this part and seeing The Doctor take the full brunt of the lightning and adding his DNA to the mix.   That effect was pretty cool and probably one of the few things I like about this story. 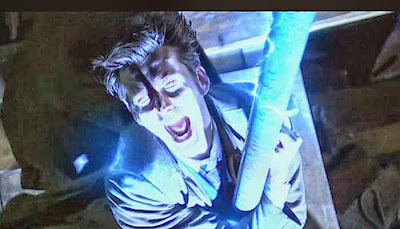 I liked how they incorporated the depression in this story adding the hardships of the era and what people went through.  Having the Daleks getting slaves from Hooverville by promising them work on the Empire State building was a pretty clever idea and easy to do since there was a lot of people down on their luck who would jump at a chance to make some money.  This made them easy prey for the Daleks and their mutant pig slaves.  Hoovervilles were very common sights during the Great Depression in the United States as ton s of people lost their jobs and their homes and ended up living in those tent cities. 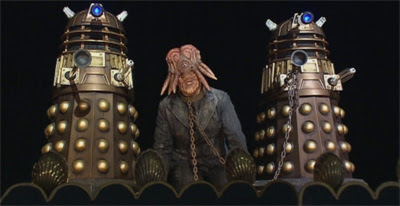 If you’re a fan of Spooks then you will recognize Miranda Raison as Tallulah.  I always liked her in Spooks but her New York City accent was pretty tough on the ears as most people in NYC do not talk like that.  Why they decided for her to talk like that and way over the top was just a bad move.  She was pretty good in the role though. 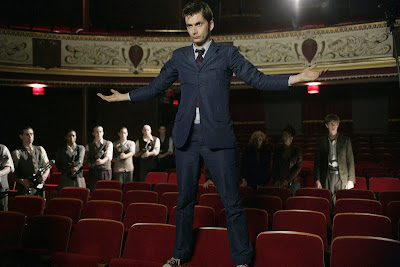 This two part Dalek story just did not do it for me as I did not like the concept of the human Daleks and the having Dalek Sec morph into a human hybrid Dalek with that god awful mask on his head with those tentacles that were  just flapping in the wind.  I was truly disappointed with this story even though they did try something different and for that I give them props for.
Grade D
Posted by DR5WHO at 9:10 PM

Email ThisBlogThis!Share to TwitterShare to FacebookShare to Pinterest
Labels: 10th Doctor, daleks, Daleks In Manhattan/Evolution of the Daleks, David Tennant, doctor who