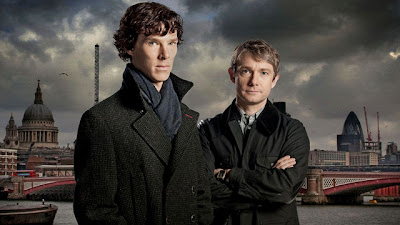 What is probably a surprise and quite funny is that the  BBC have announced that Sherlock Series 3 will make its return to US airwaves on Sunday January 19th at 10PM as part of PBS's Masterpiece.  It will be a twin bill with Downtown Abby airing before it.  The BBC did say that Sherlock would air in the UK first on BBC1 but as normal there is no air date yet.  That's the funny part in all this is the UK air date is not determined yet but a US one has been.  Still I'm sure the UK air date will surface soon enough my guess is that it will be December 29th or January 5th.
Posted by DR5WHO at 1:55 PM