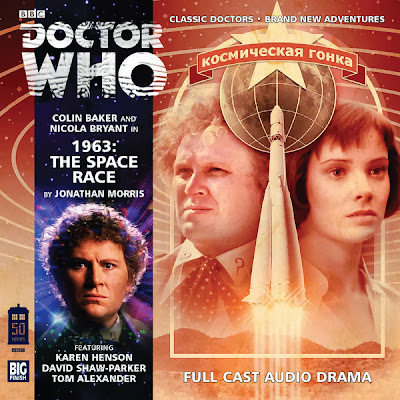 The 1963 storyline continues in the Doctor Who main range with the 6th Doctor taking center stage this month.  You can order this from the Big Finish website and check out the synopsis below.
http://www.bigfinish.com/releases/v/1963-the-space-race-717

November 1963, and the Soviet space programme reigns supreme. Having sent the first animals, then the first men beyond Earth's atmosphere, now they're sending a manned capsule into orbit around the Moon.

Just as Vostok Seven passes over into the dark side, however, its life support system fails. Only the intervention of the Sixth Doctor and Peri, adopting the identities of scientists from Moscow University, means that contact with the capsule is regained.

But something has happened to the cosmonaut on board. She appears to have lost her memory, and developed extreme claustrophobia. Maybe she’s not quite as human as she used to be…