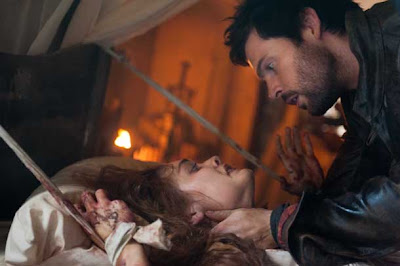 Da Vinci’s Demons took a turn towards something different as we got to see Da Vinci’s powers of deduction.  The previous weeks the show dealt with his obsession with the Book of Leaves and with him inventing something last week it was the multi canon and the first episode saw the clockwork bird.

In “The Prisoner” we see that the nuns have been possessed by the devil or so that is what we are lead to believe as Da Vinci highly doubts that the dvil is indeed wreaking havoc on the covenant.  This leads to an investigation for a type of poison that could be causing the effects on the girls.  The problem is the  the Pope has sent Lupo there to exorcise the demons from the nuns by any means necessary. 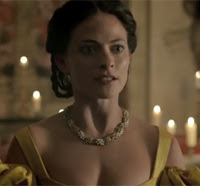 The hunt for the traitor is in full bloom as Lorenzo is getting extremely paranoid about who is spilling information to Rome.   The trouble is he suspects everyone except his wife Clarice who has been completely honest with him and his mistress Lucrezia who is in fact the spy in the mists.  In fact she has been sending information to Rome and is setting up others to take the fall.

I really enjoyed “The Prisoner” as it was a story out of the regular arc for the most part and dealt with something else.  I liked how it was more of a mystery and watching Da Vinci being a detective for the most part was pretty good.  He used his intelligence and not the aid of technology to figure out what was the cause of the nuns going crazy.  I thought this was pretty refreshing to see this in a television serial.  I liked how Da Vinci went about to find the problem even though I figured it out quite easily myself way before they made the revelation of what it was. 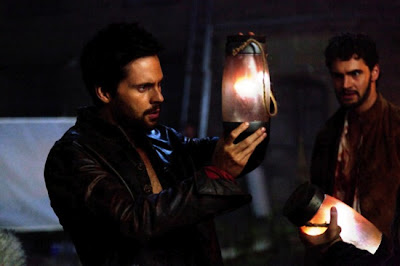 I did like how the story was set up with Count Riario playing a game with an unknown prisoner.  His opponent was like a sage wearing a cloak and you never saw his face as it was hidden all the time.  It was pretty interesting to see how the game and the events that were taking place in the story were linked in a way.  I like Count Riario and how evil he is.  Besides Da Vinci he is the most interesting of all the characters and a good protagonist.  I’m really looking forward to seeing what he comes up with next to thwart Da Vinci.

So the third episode of Da Vinci’s “The Prisoner” was pretty good and creepy at times but a pretty entertaining episode.  Da Vinci’s Demons has grown on me and I am really enjoying the direction of the show so far.