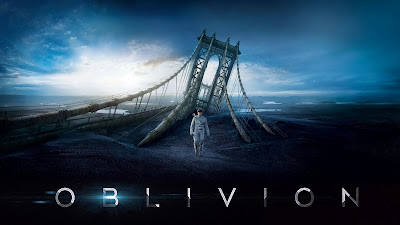 
Normally I avoid reviews of movies other than just a quick glance on whether it is positive or negative. I rarely dig deeper into a review as I would rather find my own opinion but using a review to gauge whether I might like something is always helpful. What I read about Oblivion was that it was pretty good and that it borrowed from many other sci-fi movies. I took this as potentially being an unoriginal product but from the trailer, it looked at least slick looking enough to warrant a viewing.

Jack Harper is one of the last few drone repairmen stationed on Earth. Part of a massive operation to extract vital resources after decades of war with a terrifying threat known as the Scavs, Jack's mission is nearly complete. Living in and patrolling the skies from thousands of feet above, his existence is brought crashing down when he rescues a stranger from a downed spacecraft. Her arrival triggers a chain of events that forces him to question everything he knows and puts the fate of humanity in his hands. - Universal

While watching Oblivion, within just 5 minutes or so I had already predicted many of the plot twists that would occur as the movie went along. It wasn't a matter of what was going to happen, it was when. That really didn't both me that much but it did bother me that everything that I thought could happen, did. Everything was telegraphed in this movie. The movie begins with Jack Harper (Tom Cruise) seemingly remembering something of his past and he says right away that his and his co-worker Sally's memory had been wiped for security purposes.  Right away a slew of possible reasons come to mind and basically all bets are off on what appears to be happening. You know that he is not there under the premise that is presented in the movie. If so much time had passed, why has he not aged? The flashbacks appear to be taking place in around current day so where did all the new tech come from? The ruins look like they have been decaying for years. With his memory gone, he could be anyone doing anything. An obvious possibility is that he is actually working for the aliens and the Tet is the alien ship draining resources from Earth. Easy enough to figure out and it fits perfectly. 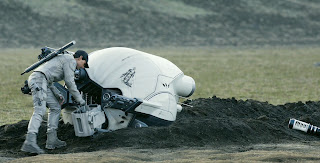 Once you know that not all is as it appears, it is easy to predict the rest of things even as far as the final moments of the film. At one point Jack is shot and gets right up – no one seems surprised. Well, that is because he is not human of course and we might have gotten that already from the fact that he was claiming to remember before the alien attack and yet the attack seemed to happen many years ago. The drones killing the human survivors from the crashed spaceship is another huge clue in this. Even when Julia is switched for Malcolm toward the end of the movie, which was a minor surprise to me, could easily be predicted and made perfect sense. The film does little to disguise its secrets as time goes on. Hints are not subtle as one by one you can check off the standard sci-fi clichés that occur. This leads to a fairly sold logical story but not the most surprising. In the end Julia is reunited with “Jack”. Of course that was going to happen because the other Jack escaped earlier in the film! 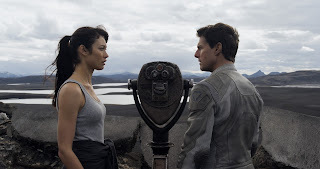 Despite all this predictability the movie has its moments. The effects and look of the film are excellent and Tom Cruise does a pretty good job in the part. If you are not familiar with many sci-fi movies then you might be surprised by the revelations late in the film. Otherwise you will recognize several films including Wall-E, Independence Day, Silent Running, and Total Recall. The film I felt Oblivion most copied was Moon and once that connection was made, it was hard not to compare every element of those two films.

I would love to be more excited about this film. In a year with several sci-fi movies that I am looking forward to, I was hoping to start with the excellence with Oblivion but alas, the movie itself will be in oblivion.

Does the film pay homage or is it just so unoriginal? You can decide that for yourself.
Posted by SHADOKP at 10:35 AM