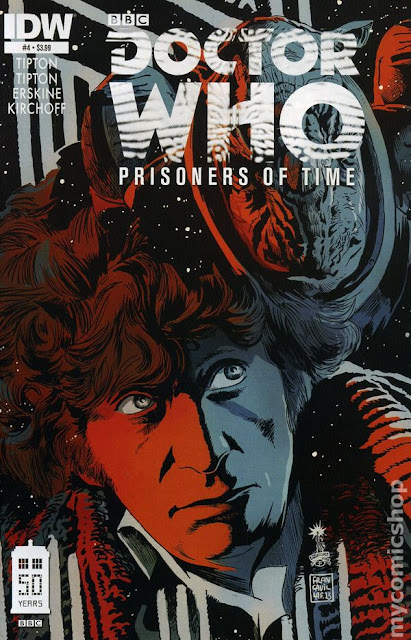 Doctor Who:
Prisoners of Time
Issue 4
By Scott and David Tipton
Art by Gary Erskine

The Doctor and Leela are in search of a feast and The Doctor knows just the place. The planet Agratis is a beautiful planet that is known for having great feasts and that is where the two travelers will be headed.   When the get there they find the planet in the control of the Judoon and they are searching for a thief.  It appears that someone has stolen the Jewel of Fawton and the Judoon have been called in to find it but they have taken a military style and seem to making a mess of the beauty of the planet.  The Doctor and Leela have volunteered at the behest of his friend Mason Vox to find out where that jewel has gone.
So far I have been enjoying this 50th anniversary story from IDW.  It has had its moments good and bad but for the most part it has been really entertaining.  Issue four has been no different.  It was a very enjoyable story and had the feel of a Tom Baker story more so at the end of Leela’s time in the TARDIS when Grahame Williams had the keys to the car.   The story had that type of thing where an alien was being oppressed while the curator of the museum kept the jewel for himself because he was selfish and wanted it for his museum.  It is a typical Doctor Who story that works nine times out of ten.
Issue four was very enjoyable and the umbrella part of the story seems to be getting going also as we are getting more of an inkling of who is taking The Doctor’s companions. I didn’t really like the characterization of the Judoon as they just did not seem like the ones we are used to seeing.  I’m looking forward to seeing how this story works out every month until the finale in November.
Grade B
Posted by DR5WHO at 8:19 PM