Doctor Who Debuts: Power of The Daleks By @ThePlanetHarris 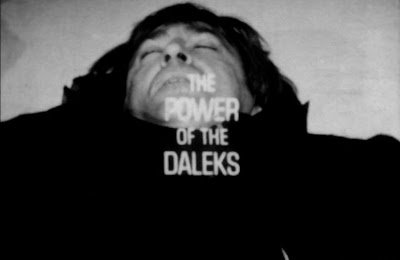 Power of the Daleks:
Patrick Troughton’s first appearance as The Doctor
By Steven Harris

On 5th November 1966 Doctor Who took perhaps the biggest risk in the history of the show in changing the actor playing the Doctor himself. William Hartnell had become increasingly unable to manage the gruelling work schedule due to deteriorating health and rather than junk the show altogether or simply change the actor without ever mentioning the fact (a tactic still used in soap operas to this day), it was decided that the Doctor’s alien physiology included the capacity to transform into an entirely different person who somehow still retained the memories of the previous incarnation.

David Whitaker wrote the script for Power of the Daleks, having previously contributed The Crusades for Hartnell’s Doctor. He would go on to write several further stories for the series, including The Wheel in Space, which introduced Wendy Padbury as Zoe. In the director’s chair was long-time contributor to the programme, Christopher Barry, shooting the fifth of his ten stories: his was an association which uniquely saw him direct all of the first four Doctors over the course of sixteen years.

Power of the Daleks is one of many series that were affected by the BBC’s obsession with wiping shows after a certain period. Very little footage remains, therefore, and I am working from a loosely animated collection of stills and off-air audio recordings providing a rough reproduction of Troughton’s first ever episode. 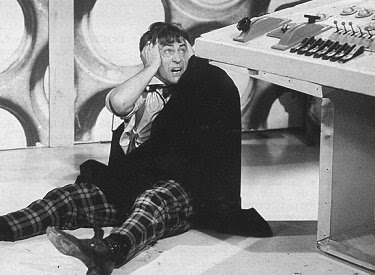 Hartnell’s Doctor having collapsed inside the Tardis at the conclusion of the previous season, Power of the Daleks opens with a re-tread of him changing into Troughton. The transformation (not referred to as a regeneration, incidentally) is accompanied by familiar Tardis noises while the Doctor’s companions Ben and Polly gawp with incredulity. Anyone thinking that Jackie Tyler introduced shoutiness to the show in 2005 should check out Ben; he practically yells every line. When Polly says that the Doctor had mentioned his body was wearing out he bellows “So he gets himself a new one? Do me a favour!”

The transformation is doing no-one any favours, however and screeching noises take over from Tardis sounds, at which The Doctor goes all head clutch and he seems to murmur something to the effect of “Slower, concentrate on one thing.” (Echoed by Matt Smith by the duck pond in The Eleventh Hour?) Then all of a sudden he’s on his feet having decided “It’s over.” He fiddles with the Tardis controls, stretches his muscles and generally behaves kookily.
Ben lowers the decibels a little but is still entirely unconvinced – “He doesn’t even act like him.” he says, as Troughton rummages through a large chest finding clothes and various props from previous stories (much as Smith does in The Bells of Saint John). The prolonged look into a mirror at this new face is an oft-revisited post-regeneration trope although on this occasion there are no comic jibes at the expense of his own new appearance.

Seeing that Ben and Polly are not convinced he is still The Doctor the Beatle-haired man tells them that he has been renewed. “Life depends on change and renewal” he adds, claiming that “It’s part of the Tardis.” (This notion that the Tardis itself is connected with the Time Lord’s regeneration is referred to during the 5th Doctor’s tenure but otherwise pretty much ignored.) 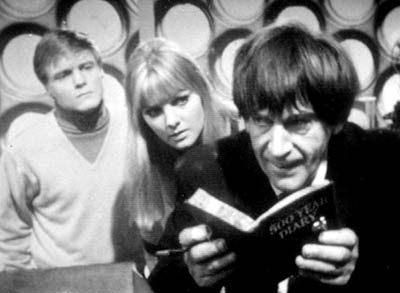 Though still referring to The Doctor in the third person, Troughton’s regeneration seems complete and he suggests they take a look outside to see where the Tardis has taken them. He whacks a stove-pipe hat onto his head and wanders out into a steamy exterior. perusing his own 500 year diary.

Bubbling silvery gloop lies in pools here and there, clearly creating a fairly noxious atmosphere – inside the Tardis the Doctor has already mentioned a heavy mercury presence in the air. A nice man says hello to the Doctor only to be shot and killed by some mysterious figure before Troughton can make his acquaintance. A brief scene change shows Ben and Polly now on the planet’s surface too, looking for the Doctor, then it’s back to our hero who has learnt from a badge on the dead man’s body that they are on the planet Vulcan and the deceased is an inspector from Earth.

Meanwhile the atmosphere has become too much for Polly, who goes all wibbly. Flash back to the Doctor who is knocked unconscious by presumably the same mysterious figure that shot the other guy. Flash back to Ben and Polly who have been hit by the chokes. Almost instantaneously, but obviously some time later, we see several men helping the Doctor. They mention having already found Polly and Ben and also refer to the discovery of a space capsule. 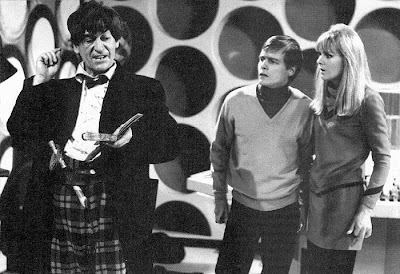 As if by magic, we are shown an interior of a laboratory which contains a largish capsule and a scientist who is examining samples of metal. He has a brief conversation with a young woman who enters the lab and we learn that Vulcan has a reasonably big colony and that political divisions are growing between different factions on the planet. The scientist is far more interested in the metal, however. It is a fragment from the ship, or from something in the ship perhaps, and he marvels that is has been submerged for centuries in mercury swamps and yet shows no sign of corrosion whatsoever.
The Doctor and his companions have been placed in a bedroom to recover. They appear to be in rude health, especially the Doctor who is annoying the crap out of Ben by playing a recorder, even answering exposition questions with frills and toots on the instrument. Predictably Ben resorts to yelling at the Time Lord. Evasiveness and irritation have remained a part of Doctor’s personality in every incarnation since, although Peter Davison was never very good at either.

The trio are interrupted by the arrival of the colony’s Governor who, like those who found the Doctor out on the planet surface, mistakes him for the examiner from Earth. Troughton is in no hurry to disabuse the Governor of this idea and becomes very interested at the mention of the space capsule. They head for the lab where there are lots of baleful stares from everyone at the capsule itself. The Doctor is evidently worried by the metal which has been undergoing tests. He mutters the word ‘exterminate’ (but then we already know the Daleks will be involved because of the title of the series).

The Doctor works with the scientist to open the outer door of the capsule. It is merely an entry bay into deeper parts of the thing, much to everyone’s disappointment. Everyone except the Doctor, that is. He is suddenly quite tired and heads for bed only to get up in the middle of the night and sneak off to the lab again. Polly notices his departure, wakes Ben and they follow him, like good, troublesome companions are supposed to do. 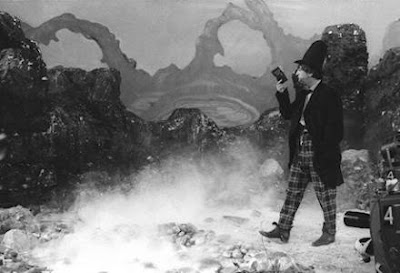 The Doctor seems to have no trouble opening the next door, one which opens in a familiarly strange swirling manner, just as the doors of the Dalek complex do in Hartnell’s first ever encounter with these creatures. Sure enough, two apparently dormant Daleks lie inside, all covered in dust and cobwebs. The Doctor is certain there would have been three occupants of the craft. Cue green, squiddy , machine-less Dalek creeping out from a hole towards the Time Lord. And roll the credits.

It was clever thinking of those behind the show to make Troughton’s first storyline involve the Daleks. For unsure audiences and kids loyal to the Doctor as they knew him only the Doctor’s greatest enemy could convince them that this is the same character, just renewed. Not entirely the same characters, of course. Clever again to let Troughton find his own way with the role rather than look for a carbon copy of what had gone before.

Some important facets of the character remain the same – a tendency to avoid direct explanations which has underpinned all three Doctors personalities since the show was revived in 2005; a keen sense of being perfectly entitled to poke his nose in wherever he so chooses; a sublime combination of bravery, foolhardiness and ingenious problem-solving.

Audience figures for Troughton’s debut were 7.9 million, up on the figures for Hartnell’s final story, and these numbers increased as the season progressed. It did not take viewer long to accept this new man as The Doctor, then. 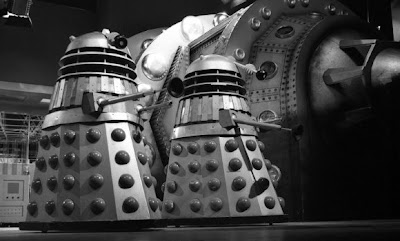 In many ways Troughton is possibly the most important Doctor of them all. Although Hartnell was the first, if viewers had not accepted his replacement (‘a clown’, as Hartnell himself describes him in the tenth anniversary special The Three Doctors) then the show would have died somewhere in the late sixties and never reached the levels of cult status it acquired during the 70s and 80s. That he brought humour to the role was important too: Davison aside, arguably, every Doctor since Troughton has been able to alleviate tension or bamboozle enemies with a spot of tomfoolery.

One day maybe all episodes of Doctor Who will be available in some format or other (assuming off-air recordings and filming scripts exist). That way I can geek away to my heart’s content comparing one Doctor with another. Or perhaps it’s time we sent Matt Smith back to Broadcasting House in the sixties to save the original recordings before some managerial idiot in the BBC decrees that they be erased?
Posted by DR5WHO at 9:14 AM

Email ThisBlogThis!Share to TwitterShare to FacebookShare to Pinterest
Labels: 2nd Doctor, doctor who, Doctor Who 50th Anniversary, Patrick Troughton, Power of the Daleks