Dark Horse Comics made quite a bit of news at this weekends C2E2 Comic Book and Entertainment Expo.  It appears they are heading back to doing super hero comics possibly getting ready to fill the void when they will inevitably lose the rights to Star Wars comic books.  Here is a press release for Alex De Camps Grindhouse: Doors Open At Midnight comic book. 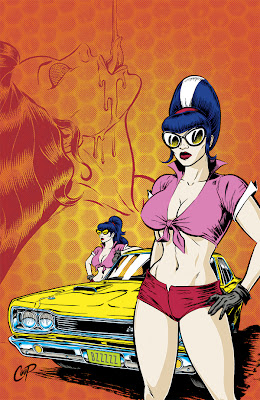 APRIL 28, CHICAGO, IL—From the floor of C2E2, Dark Horse announces a book that was almost too much for the editorial team! Eisner nominee Alex de Campi (Smoke, Ashes) headlines a B-movie comic masterpiece in Grindhouse: Doors Open at Midnight!

With covers by superstar artists Francesco Francavilla, Dan Panosian, and Coop, this series is excessive, gratuitous and tasteless—just like you love it.

“Grindhouse is the comic your mother warned you about. Seriously. You know when grownups told you comics were filthy, immoral trash? They were talking about this comic specifically,” states Alex de Campi. “Books like Grindhouse were the reason the Comics Code was invented. And if you’re in a very conservative or evangelical part of the US, you should be careful where you read it. Each story is two issues of solid gore, gratuitous nudity, and over-the-top badassery. It’s filthy. It’s violent. It’s really, really fun.”

For a sneak peak at several interior pages, check out Alex de Campi's interview on Bleeding Cool.
Grindhouse: Doors Open at Midnight #1 is on sale October 2 in comic shops everywhere (where it’s not outlawed)!