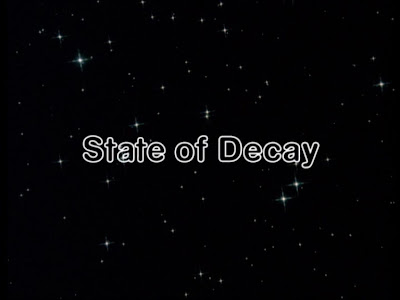 Doctor Who:
State of Decay
By Terrance Dicks

“Hence it is the directive of Rassilon that any Time Lord who comes upon this enemy of our people and of all living things, shall use all his efforts to destroy him, even at the cost of his own life.”

Still trapped in E- Space the TARDIS materializes on an unknown planet that seems to be like medieval times back on Earth.  There on the planet the local villagers fear The Three Who Rule.  The Three Who Rule have banned all technology and all learning and anyone caught doing it will be put to death.  The villagers are also in fear of their sons being picked in the selection and sent to the castle where they are sacrificed are drained of blood to feed the Three Who Rule but more importantly the Great Vampire living below the castle.

The Doctor tells Romana that it is the responsibility of every Time Lord to destroy vampires but more importantly The Great Vampire.  The only way to kill the Great One is with a bowship and there are none around.  With the help of the villagers and some ingenuity to use the castle as a bowship it is up to The Doctor to save Romana and Adric from the vampires and to destroy the ancient enemy of Rassilon and the Time Lords the Great Vampire once and for all. 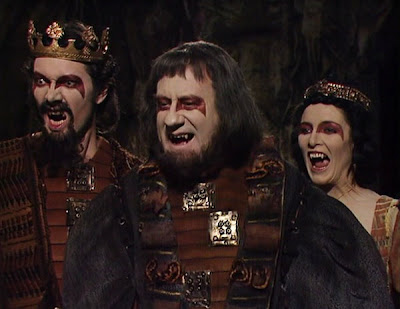 Edward and Bella, Sookie and Bill and other sappy vampire couples are second rate compared to Zargo and Camilla.  Zargo and Camilla along with Aukon is Doctor Who’s one true vampire couple. Long before the Matt Smith story “The Vampires of Venice” this classic story by long time Who scribe and fan favorite Terrance Dicks actually boasts human vampires and a really cool castle. 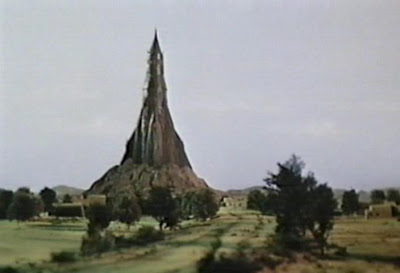 The State of Decay is the second part of The E- Space Trilogy and heralded by some to be the best story of the three.  I tend to agree.  Some may say that State of Decay is downright scary and has a creepy feel to it.  For example when Romana cuts her finger while clanking glasses with The Doctor the look on Camilla’s face is downright creepy as you know she wants to suck up that blood. The atmosphere of this episode really makes it one of those stories that you tend to remember long after watching it. 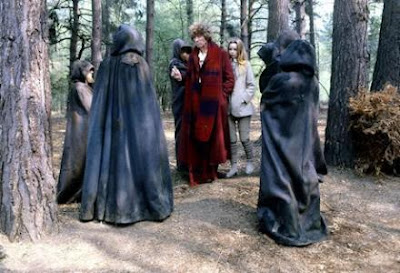 It is also a very interesting story in the fact that Terrance Dicks delves us into more Timelord history and their involvement in a war with the Great Vampire.  Yes it seems the Timelords were a warmonger race well before they fought in the Time War.   But it is also great to see the Doctor scared as he is reading the history of the Timelords involvement with the vampires that you tend to get scared yourself.  It is just a classic scene finding out more about the history of the Time Lords.  Imagine how the Doctor must feel like knowing it is his solemn duty as a Timelord to eradicate the universe of vampires and he happens upon the king of all vampires who happens to be feeding off an IV of blood that Arkon has gathered from sacrificing the villagers. 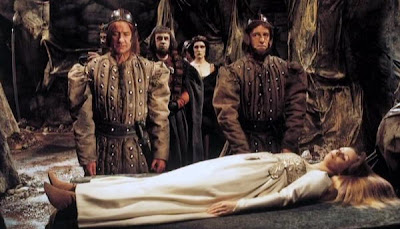 My fond recollection of watching this story is mainly that the Doctor is fighting vampires and a return to the gothic feel Tom Bakers earlier stories had.  A group of three vampires that is in a word very odd and very scary.  One hell bent on terrorizing the villagers and the other two who seem to be living an extremely bizarre love life.  Plus it also has a great story of the villagers rising up against their oppressors and winning their freedom.  That formula was a staple of most Doctor Who stories but mainly from the Jon Pertwee era where Terrance Dicks did most of his writing for the show but it was good to see that in a Tom Baker story. 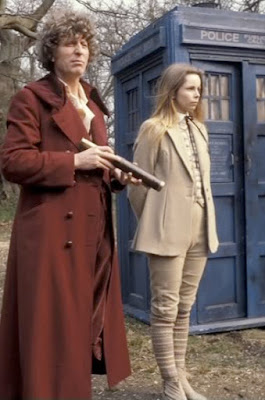 Doctor Who didn’t do vampires very often if at all and when they did way back in 1980 with a story Terrance Dicks wrote back in 1977 they succeeded in giving us and Season 18 a wonderful and scary story.  Imagine opening up the fuel tanks and seeing it filled with blood.  Really chilling and cool at the same time.  The gothic feel to this story helps with the horror story feel to State of Decay.   State of Decay is a wonderful story that gets lost in the shuffle when talking about the best stories of the Tom Baker era and this one should be right up there.
Grade B +
Posted by DR5WHO at 12:00 PM