Doctor Who 50th Anniversary: The Horns of Nimon By @Paul_Bowler 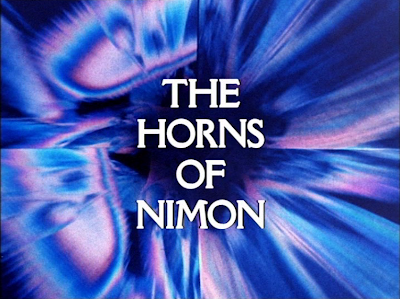 Doctor Who:
The Horns of Nimon
By Anthony Read
Reviewed by Paul Bowler

" In the name of the Second Skonnon Empire."

Having dismantled the TARDIS consoled to carry out some maintenance, the Doctor and Romana are forced to investigate a Skonnan spaceship that crashes into them. After boarding the ship the two Time Lords discover that the vessel is carrying a group of young sacrifices from the planet Aneth, along with a cargo of radioactive hymeusite crystals. The Skonnan’s have forged an alliance with the alien Nimon, a fearsome monster who lives in a maze on their homeworld of Skonnos, who has promised to help their leader - Soldeed - rebuild the Skonnan Empire.


The pilot of the ship captures Romana and leaves the Doctor and K9 stranded in space. The Doctor manages to repair the TARDIS and follows them back to Skonnos. Once there, the Doctor and K9 enter the maze to help Romana and the sacrifices escape from the Nimon - who are in fact scavengers who travel from planet to planet to plunder their recourses for their own ends. Romana is accidentally transported to dying world of Crinoth, but she manages to use the space time tunnel to return in time to escape the Nimon infested planet to help the Doctor. When Soldeed realizes that there is more than one Nimon in the complex, he is powerless to stop them and is killed, but the Doctor manages to destroy the complex and kill the Nimon before they can carry out their plan. 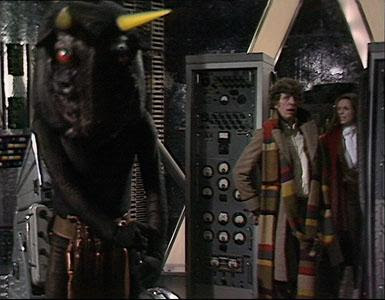 The Horns of Nimon is the final story of Season Seventeen. Its not the most fondly remembered Doctor Who story, but the scrip by Anthony Read does have some great scenes between the Doctor and Romana, and director Kenny McBien succeeds in part by making this quite an action packed story. Tom Baker is at his eccentric best, with K9 also having plenty to do, and Lalla Ward is brilliant as Romana - she even makes her own sonic screwdriver and gets most of the best scenes in the story. 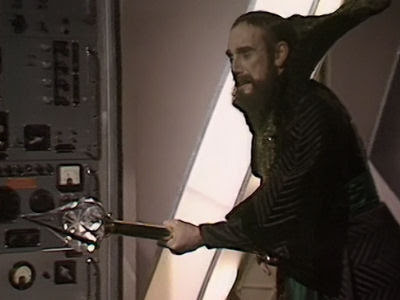 Unfortunately the special effects are not that good, the sets are quite poor, and even the bull-like Nimon costumes look completely unconvincing. The Nimon teeter about and are probably one of the worst monsters ever seen in Doctor Who, although their voices are actually quite good, but they do look very silly as they stomp about roaring all over the place. The Horns of Nimon is one of those Doctor Who stories that falls into the category of being so bad it’s good! I think that’s why I like it so much, it’s just downright silly, and Graham Crowden completely steals the show with his over the top performance as the deranged Soldeed. It may be absolute rubbish from beginning to end, but it’s incredibly funny at times, and Tom Baker and Lalla Ward are fabulous in it.
Posted by DR5WHO at 6:00 AM

Email ThisBlogThis!Share to TwitterShare to FacebookShare to Pinterest
Labels: 4th Doctor, doctor who, Doctor Who 50th Anniversary, The Horns of Nimon, tom baker