More Dark Horse Comics news from C2E2 as they are really getting going on getting their superhero line going again.  The new title will be Buzzkill by Donny Cates and Mike Reznick. 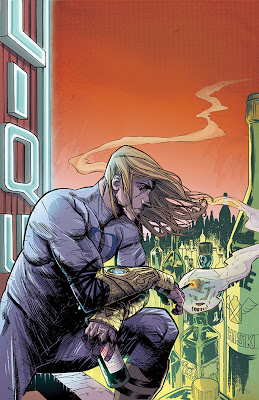 A NEW SUPERHERO SERIES OF BOOZIN’ AND BRUISIN’!

Ruben is not your average alcoholic; he’s an unstoppable superhero who derives his powers from imbibing massive amounts of alcohol. After all the disasters it’s caused in his personal life, he’s ready to get clean . . . and the city’s supervillains couldn’t be happier!

“What I like so much about the book is that while it has these wild superhero trappings, at its core it’s a very sweet and very personal story about the relationship between power and addiction, and the very real consequences of both,” states Donny Cates. “It’s something that really interests me, and I think that sometimes we approach issues like these in comics as punch lines. What we’ve really tried to do here is take something really devastating and horrible, and examine it through a very familiar terrain. Also, there is a character named Panteradactyl. So there’s that.”

“Working on Buzzkill is kinda like hanging out in a bar, drinking beers and doing shots with your buddy, and discussing the weirdest, wildest, most effed-up stuff you can think of to put in a comic. In fact, that’s exactly what it’s like,” says Mark Reznicek. “Donny Cates is the evil genius of comics, so it’s a total blast to work with him. If you ever wanted to see what a drunken, superpowered barroom brawl looks like, or wondered what would happen to bears in the airless vacuum of space, or wanted to see a baboon in a business suit . . . Buzzkill is the book for you!”

Buzzkill #1 is on sale September 18 in comic shops everywhere!
Posted by DR5WHO at 6:35 AM