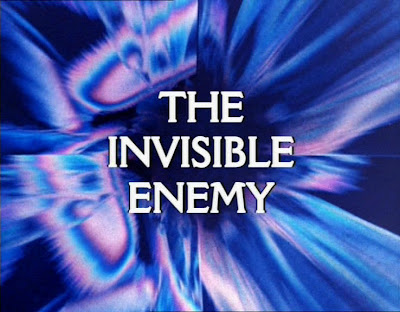 Doctor Who:
The Invisible Enemy
By Bob Baker & Dave Martin

“Contact has been made. The nucleus has found a host. Prepare for his coming.”

Three new crew members arrive to relive the crew on Titan Base.  The problem is their ship flew through a cloud and was infected by the Swarm.  They end up killing everyone or infecting anyone they come in contact with.  While this is going on The Doctor intercepts a mayday from Titan base and decides to go and help but the TARDIS flies through the cloud and The Doctor gets infected by the Swarm. 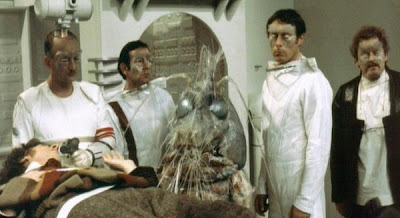 I really do not like The Invisible Enemy.  Yes it is historically notable for being the story that introduces us to K-9 but it just didn’t interest me a whole lot.  I do like the whole sequence inside the Doctor’s mind.  I thought that was really well done and actually quite good.  I found it interesting seeing the Clone Doctor explaining to Leela how his mind worked.  It was pretty funny seeing him use the anti-bodies to ward off the people searching for him. In fact the anti-bodies looked like mini Rovers. 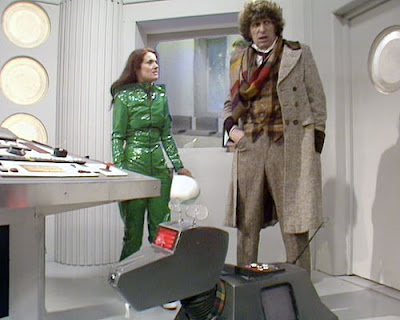 I just did not like the story all that much.  You have the Swarm infecting everyone and going around like business as usual.  No thinks to stop them or ask them why they are covering their eyes. Plus the solution was too easy.  They just locked the machine he was in and blew it up.  It was nothing more than that just a big explosion to wipe The Swarm out. It was very anti climatic unfortunately. 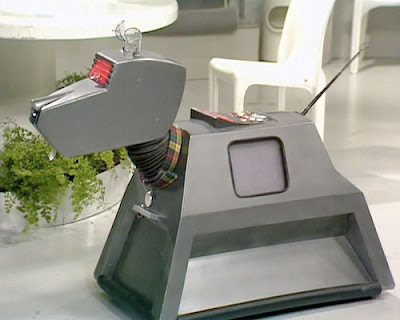 I do say that Leela was pretty good in The Invisible Enemy.  With The Doctor incapacitated and being taken over by the Swarm she took center stage into saving The Doctor.   It was one of the better stories for Leela as she wasn’t going around trying to kill everything that walks for once.  Unfortunately The Invisible Enemy just wasn’t all that good despite a unique sequence inside the Doctor’s mind and seeing the 4th Doctor evil for a short time.  But at least we get that new companion and that didn’t seem to work properly for the production crew K – 9.
Grade C
Posted by DR5WHO at 4:11 PM