Doctor Who 50th Anniversary: The Talons of Weng-Chiang 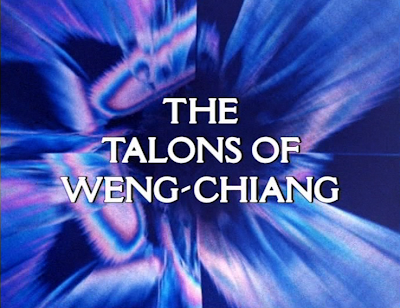 Doctor Who:
The Talons of Weng-Chiang
By Robert Holmes


“I don't know who's a blackguard. Some slavering gangrenous vampire comes out of a sewer and stalks this city at night, he's a blackguard. I've got to find his lair and I haven't got an hour to lose.”


The Doctor brings Leela to Victorian London to see how her ancestors have lived.  What happens next is just typical luck for The Doctor as they get involved with a case that involves the Tong of the Black Scorpion.    There also appears to be a connection with a a slew of woman disappearing and it seems to all center around Jago’s theatre and his main act Li H’sen Chang.  It appears that Chang is working for the 51st Century criminal Magnus Greel or as he is known now Weng – Chiang.


With the aid of giant sewer rats and the murderous Peking Homunculus Mr. Sin it appears that Greel might be able to get the time cabinat working again and get the Zeta beam to take him home.  Unfortunately this will cause great repercussions to Earth as the beam is spread thin and will not work.  So it is up to The Doctor and Leela and the aid of his two new friends Jago and Lightfoot to stop the villainous Greel and save the Earth in the processes. 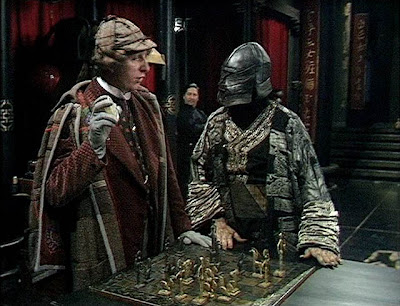 The Talons of Weng-Chiang is one of those stories that is just timeless and is such a true classic.  It is Tom Baker at his best. He is not to silly and he just has a commanding presence in this story that he just takes over the case.  The Doctor does his best Sherlock Holmes impersonation in this story with his attire and his mannerisms as he does become a detective in this story.  It is good to see Doctor Who give a nod to the great detective and have the two British institutions join forces in a roundabout way. 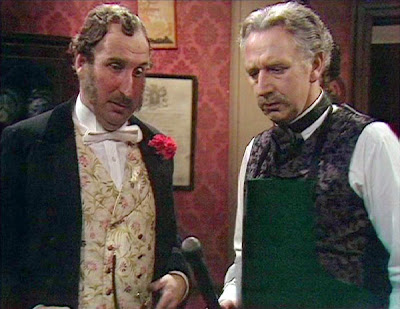 I loved the characters of Jago and Lightfoot.  They bring a certain Victorian style and a bit of light heartedness with their funny moments.  There is great chemistry between the two of them that it was a no brainer for Big Finish to bring them back with their own series of audio adventures.  They just worked and were one of the perfect secondary characters created for Doctor Who.  To bad they never returned to the series on TV. 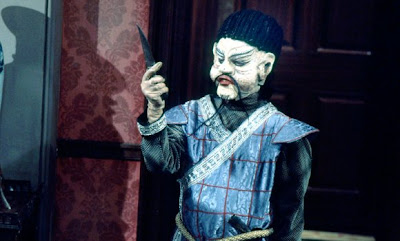 I just loved Mr. Sin.  Played by Deep Roy this character was evil.  Killed without remorse and just seemed to enjoy it way too much.  Disguised as a ventriloquist dummy that was actually alive was pretty freaky and scary to one so young when he first watched The Talons of Weng-Chiang.  In fact I still find Mr. Sin Creepy but not so much anymore since I meet him in person. Mr. Sin is truly one of the evilest Doctor Who baddies of all time. 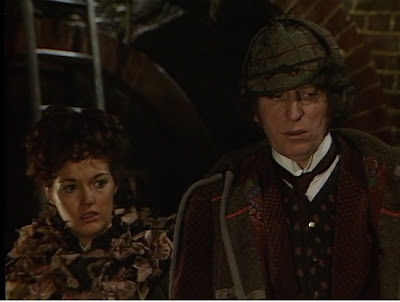 The Talons of Weng-Chiang is to me a perfect story.  There isn’t anything that I do not like about it.  It is a story that I feel in love with back in the day and still enjoy watching over and over again.  It is just that enjoyable and I do love the giant rat in the sewer even if it does look like it should be on a kid’s bed.  I also like how it also pays homage in a way to The Phantom of the Opera.  The hole theatre set and Greel lair under the theatre is classic. What is there not to love about this story?


The Talons of Weng-Chiang is a true classic written by one of the best writers of the shows history in Robert Holmes and he delivers one of his best all time for the best Doctor of all time.

Email ThisBlogThis!Share to TwitterShare to FacebookShare to Pinterest
Labels: 4th Doctor, doctor who, Doctor Who 50th Anniversary, The Talons of Weng-Chiang, tom baker