Doctor Who - The Justice of Jalxar Review 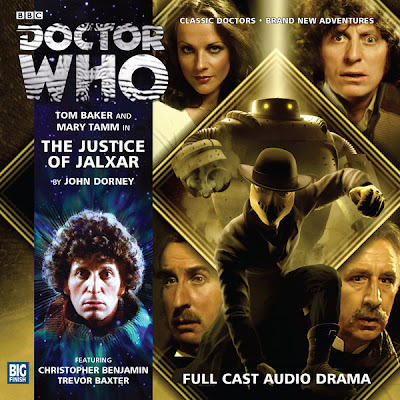 Doctor Who:
The Justice of Jalxar
By John Dorney
Starring Tom Baker & Mary Tamm
With Christopher Benjamin and Trevor Baxter as Jago and Lightfoot.

I thought The Justice of Jalxar was ok.  It just did not grab me. The aspect of a vigilante taking the law in his own hands and using an alien robot would cause for an exciting story.  But I did not find it that way.  I found the story to be average at best and very predictable.   I had no trouble figuring out what would happen at the end and that it came as no surprise was really disappointing.

What I did enjoy was the interaction between Jago and Lightfoot and The Doctor.  It was like it was in The Talons of Weing – Chiang.  This was the high point of this story and really made up for the mediocre story.   It was really good to listen to these three act together again and they seem to have a good chemistry with Mary Tamm also.   Unfortunately that is the only thing I found enjoyable about this story and hopefully the next one in the series will be better.

Email ThisBlogThis!Share to TwitterShare to FacebookShare to Pinterest
Labels: 4th Doctor, doctor who, Jago and Lightfoot, The Justice of Jalxar, tom baker