Doctor Who - The Spear of Destiny Review 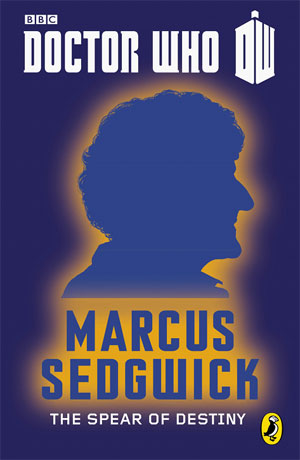 Doctor Who:
The Spear of Destiny
By Marcus Sedgwick

The Doctor and Jo are on the case to steal the Spear of Destiny from a museum in London.  The Brigadier is convinced something is strange with that historical piece and will give what help he can to The Doctor in stealing it.  The theft doesn’t go as planned as there were some strange security devices protecting it.  Plus it turns out that it is a fake.  So The Doctor worried about the power that the Spear possesses wants to get the real thing and proceeds to go back to the time of the Vikings. While there things aren’t what they seem as there are traces of technology and an old enemy waiting for them.

Of all the stories that have been released for Penguins 50th Anniversary Doctor Who celebration The Spear of Destiny actually felt like a story that could fit in that particulars Doctor’s era.  It had the feel of a Jon Pertwee story as it had UNIT and of course The Master involved.   Marcus Sedgwick captured the 3rd Doctor to a T and that was pretty good to see considering how the previous stories were close but no cigar.

Using the Spear of Destiny was a pretty good idea and having it something dangerous that the Time Lords wanted it removed was a pretty good idea and made for a good story.  I enjoyed The Spear of Destiny very much and was entertained throughout the story.  It was fun and interesting to read and kept my interest throughout.  I loved the twist the added in Viking times and would have been disappointed if The Master hadn’t shown up at some point.  It really had that third Doctor feel to it and thankfully someone wrote a story that didn’t mess with the mythos.

The Spear of Destiny was a fun short story and so far to this point the best story from the Penguin short stories of Doctor Who 50th Anniversary stories.
Grade A
Posted by DR5WHO at 7:00 AM

Email ThisBlogThis!Share to TwitterShare to FacebookShare to Pinterest
Labels: 3rd Doctor, doctor who, jon pertwee, The Spear of Destiny