Doctor Who 50th Anniversary: The Creature From The Pit 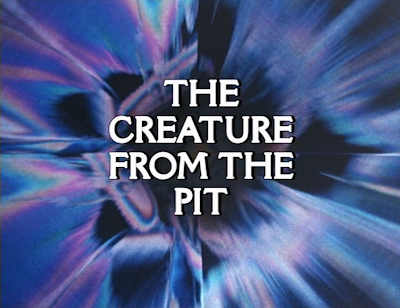 Doctor Who:
The Creature From The Pit
By David Fisher


“Mister McGregor. He's chasing Peter Rabbit. He's got a sieve. He's going to pop it on top of Peter!”


The Doctor and Romana respond to a distress call that takes them to the planet Chloris.  There The Doctor finds an egg that is the source of the distress signal.  The Doctor and Romana are captured by Lady Adrasta’s guards and are heading to see her when all of a sudden they are attacked by a band of thieves who are obsessed with metal.   The Doctor meets Adrasta and the proceed to head to the pit.


While there Romana escapes the thieves with the aid of K – 9 when they meet The Doctor at the pit and watched the execution.  You see something in the mines of Chloris is living in there and is hungry for humans.  So the Doctor jumps in the pit to see what it is and what he finds is a huge creature that has no ways of communicating. 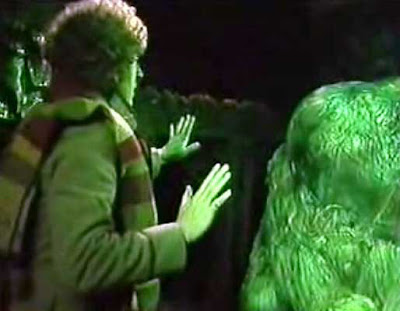 I really do not like The Creature from the Pit and have often wondered why it was even made.  It is just a bad story that just is boring to watch.  It mainly takes place on a planet that is planet infested and their guard dogs are giant green tumbleweeds called Wolfweed.  Yes giant Wolfweed capture you and incapicitae you.  Rolling and viscous tumbleweed is truly not a memorable creature in Doctor Who. 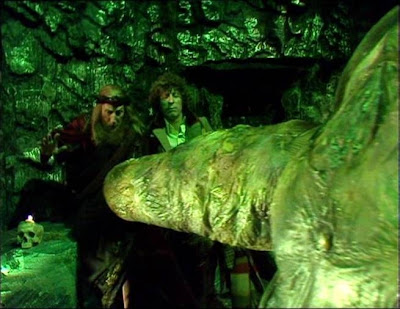 The story is not all that memorable but it does have a scene in it that is sort off a double entendre where it looks like The Doctor is talking down into well I’m sure you can figure it out what male part it is.   The Doctor strikes up quite the relationship with that creature after that I would imagine. 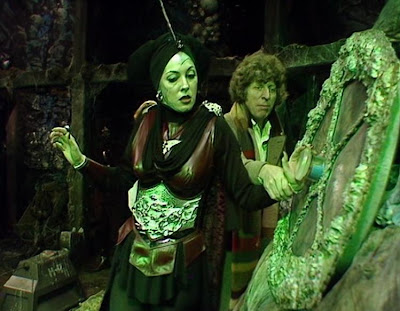 This story is just plain bad.  Everything about it just isn’t good from the thieves to Lady Adrasta to the creature itself.  What is a four part story that just should never be as we stumble through four parts of getting captured and escaping and so on and so on just makes The Creature From The Pit one of the stories you would rather forgot existed in the Tom Baker era.  Grade D

Email ThisBlogThis!Share to TwitterShare to FacebookShare to Pinterest
Labels: 4th Doctor, doctor who, Doctor Who 50th Anniversary, The Creature from the Pit, tom baker