Doctor Who - War Against The Laan Review 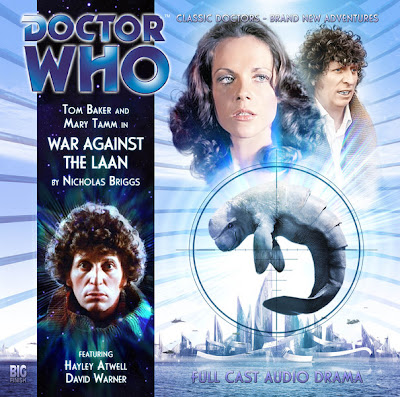 Doctor Who:
War Against The Laan
By Nicholas Briggs
Starring Tom Baker and Mary Tamm

The Laan are posed to attack Earth after the aggression against the Laan who is giving birth there.  Cuthbert wants to destroy them but The Doctor’s warning that Earth would be destroyed is going on death ears.   The Doctor tells the Earth President that if Cuthbert attacks the Laan they will destroy Earth to protect the Laan that haven’t been born yet.  Romana is trying desperately to get the Laan to stop by using the psychic connection she has with the Laan.  But she is not having much success.  If The Doctor doesn’t come up with a solution it could be the end of all life on Earth human and Laan.

The second part of the Sands of Life is actually not all that bad but not as exciting as the first part.  It was good but there just seemed to be a lot of the typical must destroy the alien stupidity that you get a lot of in Doctor Who.  Cuthbert played by “Cold Wars” David Warner is just that type of character that you have seen many times before. But even with that said David Warner is really good as Cuthbert and worth buying the audios just to listen to him.

The performances of Tom Baker and Mary Tamm are spot on and it takes me back to season 16 as the two still have that chemistry together.  Their performances has been the high point so far in these series of stories and worth listening to.  War Against the Laan also has another big time guest star as Hayley Atwell plays the President of Earth and is good as always when she takes time out of her schedule to do one of these audios.  War of the Laan was a decent adventure to with a good solution but isn’t as good as the first part.
Posted by DR5WHO at 10:42 AM