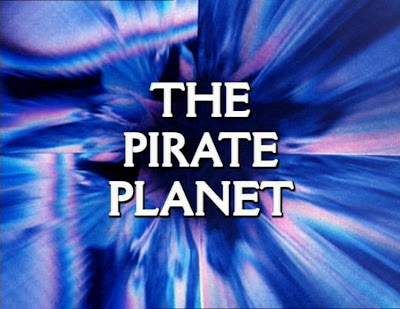 Doctor Who:
The Pirate Planet
By Douglas Adams

“Appreciate it? Appreciate it? What, you commit mass destruction and murder on a scale that's almost inconceivable and you ask me to appreciate it? Just because you happen to have made a brilliantly conceived toy out of the mummified remains of planets.”

The Doctor and Romana are off to find the second segment to the Key to Time.  They find out that it is on the planet Calufrax but when The Doctor and Romana arrive they find themselves on Zanak.  Now The Doctor is confused and blames it on the disturbance they felt while trying to materialize.  What has the pair of time travelers confused even more is that the locator is picking up strong traces for the second segment.

Up on the mountain is the Captain.  He is a cyborg type pirate captain who rules by installing fear with the aid of his killer robotic parrot. There with the aid of Mr Fibuli they have come up with a way of materlizing their planet among other planets and stealing the minerals of that world for themselves.  This process has killed billions of species and must be stopped.  With the help of the telepathic Mentiads The Doctor and Romana must return the destroyed planets stop the Pirate Captain and his weird nurse and recover the next segment to the Key to Time. 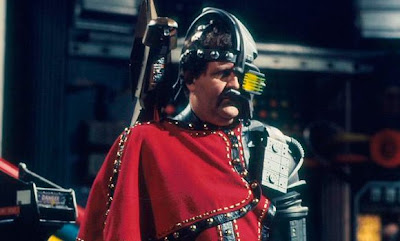 The Pirate Planet is the first story that Douglas Adams wrote for Doctor Who and it has his trade mark humor in it.  It is a wonderful story that is zany and over the top plus it is pretty good on the science fiction side also.  I love the fact that he made an entire planet travel through space by materializing around a planet. Pretty ingenious and clever and it is something I always remembered when I watched this as a kid and thought it was pretty neat to see the Captains trophy case with all that remains of the planets. 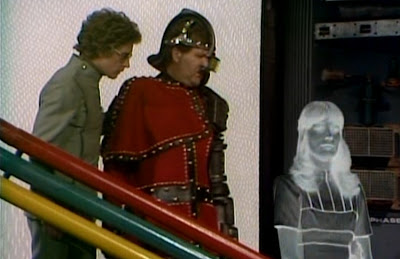 The Captain, even though he looks neat, was one of the most over the top characters in Doctor Who ever.  I mean just watch his performance and how he delivers all his lines in his robust way.  Extremely over the top and comical at the same time as he is actually a funny character also as you really cannot take him seriously at all. I guess that’s why he was really a puppet to Queen Xanxia as she was really pulling his strings. 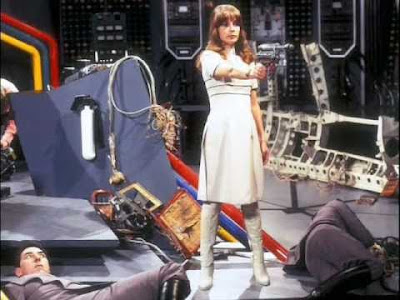 I really like this story and most people do mainly for how well Douglas Adams wrote it and the cleverness with it.   Tom Baker is really good in it and has some really dramatic moments despite the comedic nature of the story.   Mary Tamm gives us a good performance even though she really is in a secondary role in this story.  The Pirate Planet has a lot going on also as the Mentiads are pretty interesting and if there is a fault is that they were a little bit too powerful.  I mean the part with the wrench and talking telepathically through the vortex was a bit of a stretch. 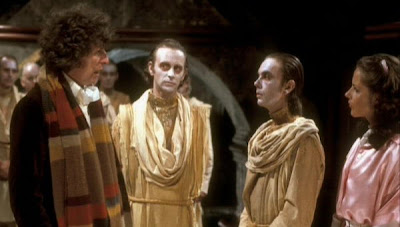 The Pirate Planet is a true classic Doctor Who story and quite possibly the best story of the Key to Time season but it is not the best Douglas Adams Doctor Who story as that would come next season.
Grade B +
Posted by DR5WHO at 2:46 PM