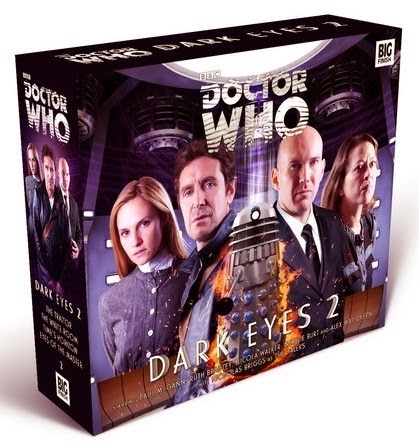 The sequel to the popular and one of the best Paul McGann audio adventures from Big Finish Dark Eyes 2 will be out in February.  The 4 disc box set sees the 8th Doctor going up against the Daleks once again.  He is joined once again by Molly O' Sullivan the World War One nursing assistant. Plus there is an old enemy tagging along to make things difficult for Doctor 8. You can order it at the Big Finish website.
http://bigfinish.com/releases/v/dark-eyes-2-978

When the Doctor defeated the Dalek Time Controller and its Time Lord ally, the timelines shifted and events changed... but the danger is far from over. And new threats to the continued safety of the universe are emerging.

Molly O'Sullivan carried on with her life as a nursing assistant in World War One. She probably thought she would never see the Doctor in his 'Tardy-box' again...

From the Dalek occupied planet Nixyce VII through Earth's history and to the very edge of the universe, the Doctor's footprints across eternity are being tracked by foes old and new. But when did it all begin and when will it end? Living his life through the complexities of time travel, the Doctor can never be quite sure if he's experiencing his life in the most helpful order. The only certainty appears to be the advance of the powers of evil and the oncoming threat of a fight to the death against forces that would destroy everything the Doctor holds dear.

Part 1: The Traitor
by Nicholas Briggs

Nixyce VII is under Dalek occupation. For many, their only hope of survival is decent medical care, as slave working conditions under the Dalek regime are appalling. But when you help people to survive under the rule of the Daleks, are you actually helping the Daleks? Med-tech Liv Chenka doesn't have the luxury of pondering these dilemmas. She must just do what she feels is right.

But then there are the soldiers of last resort... The freedom fighters left behind to cause maximum damage to the Dalek war effort, at whatever cost. To them, anyone who seems to be helping the Daleks is a traitor.

And when the Doctor arrives, his secret agenda throws him into conflict with everyone.

Molly O'Sullivan is still trying to help people, but now she is back in London, staying in Baker Street.

But there are dangerous forces abroad. Where are the young deserters disappearing to? Who are the Huntsmen? And what is really going on at the Blackwell Convalescent Home?

Perhaps the mysterious 'Surgeon General' has the answers. To find out, the Doctor must tackle an old and baffling enemy.

The Doctor and Molly find themselves at the very edge of creation. But something dangerous seems to be heading back into the known universe from the very end of time.

The crew of the cryo-ship Orpheus, including its medical officer Liv Chenka, have their mission parameters to adhere to; but the arrival of the Doctor and Molly changes everything. An ancient and terrible force is on a collision course with them all and the outcome seems to be a matter of divine destiny.


Part 4: Eyes of the Master
by Matt Fitton

The Doctor, Liv and Molly arrive back on Earth in the 1970s to investigate the Ides Institute. The timelines have shifted since the Doctor and Molly first travelled here and all is not as it was. Dr Sally Armstrong is still working for the Ides, but her associate has a devastating plan in mind.

Soon, Molly's 'dark eyes' prove to be at the centre of a plot to seize control of all life in the universe.