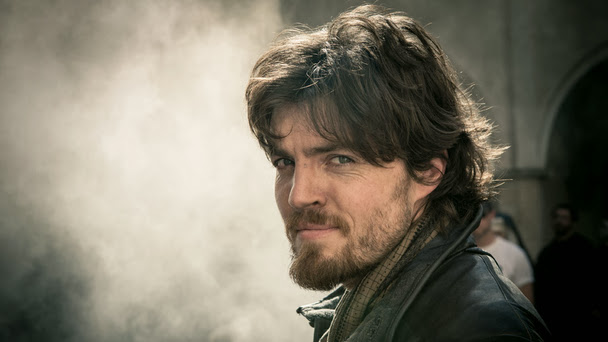 We continue now with The Musketeer week and the second interview for today is the first one with one of the four Musketeers.  Tom Burke talks to the BBC Media Centre about playing Athos. The Musketeers airs Sunday on BBC One.


What attracted you to the show initially?

I think, unlike other superheroes, what one gleans about the Musketeers, certainly from the source material, is that the good that they do happens in quite a spasmodic manner, in short bursts. I identified with that - if I was ever to be someone who was involved with protecting mankind from peril, I'm not sure if I would be able to do it in a particularly strong and sustained manner. I loved that about the characters in the book, they are extremely eccentric and do what they can, when they can. When I came on board there was only two episodes written so I was saying yes to what was there, but also to the whole idea of the show. It was more than just a script; there was a history and a heritage to it. The scripts Adrian has written are snappy, fast-paced and full of wit.

Did you re-read the novel before embarking on the project?

I did yes, and I dipped in and out of it whilst we were shooting the project. I also read quite a lot of other Dumas stories. I think The Musketeers is probably the Dumas novel people are most familiar with, or if not that, it's The Count Of Monte Cristo. I've always been a big fan of Dumas because, on the one hand, he writes a lot about revenge, but he also writes about the cost of it to the revenger - I'd always had an interest in that.

How did you approach playing Athos?

Initially there was a certain amount of editing going on in terms of how much of myself I brought to it, because the character seems above all else to have such great economy of expression, so I wanted to get that in all the different ways I could - physically and vocally. To a degree, he is also a father figure to the others, and has quite a painful history. He relies on the structure of the Musketeers hugely - he is almost institutionalized by it. He would be lost without it.

Like all of the Musketeers, he is a maverick - they all like to do things their own way. He drinks, and that helps him function, and also to make him feel more sane. I think he is a very romantic character - although virtually celibate - because of everything that has happened to him. He is deeply weary of women, and one of the interesting things about the series is that, because new stories have been brought in, it was a chance to see him confronted by a very different femininity when he meets Milady.

There is a line in the book that says he smiles but never laughs, and that really helped me to shape the character. When he does smile it' almost to do with the other three - the enjoyment of their particular eccentricities.

Does that sense of brotherhood shape the show?

Yes absolutely - they are deeply reliant on each other on all sorts of levels, not least of all emotional - that's part of the comedy of it. Although you could argue that Athos is the most solitary of them, each one of them is prone to the odd outburst of 'well damn everyone else, I'll sort this out myself.' None of them is the lone ranger. As human beings, we are essentially reliant on each other and any notions we have of a life of autonomy is an illusion really. I think that’s one of the most important parts of the whole story.

How did that translate to being on set with the other cast members?

I would say I'm so aware of that now - because I really miss the other three guys and Hugo and all the other cast, but particularly the boys because I got so used to being with them.  I just remember laughing so much when we were doing it but I’m sure that was the parts feeding into us and us feeding back into them.

What was the biggest challenge whilst you were out there?

It was the first time I have played a lead in a series, and been in it all the way through in a very consistent way and I would say the biggest challenge is hanging on to your through line but trying to make it fresh and trying to not repeat yourself. It’s the difference between spontaneous and random. Having different directors for each block helps that because there is a negotiation there - they have things that they want to see but you can help to guide them by telling them how it slots in to what has happened before and after in the series.

What do you hope the audience gets out of the show?

I just hope they enjoy it. I don’t know if it’s necessarily the sort of thing where you expect people to be watching the credits roll and thinking about their own life. It's romantic, it’s an adventure and it does nod its head to something earlier, something Arthurian, not the series but the era when chivalry and honour were important things. It’s about four heroes who are, despite being heroic are eccentric, occasionally getting it wrong and needing each other.
Posted by DR5WHO at 9:09 AM