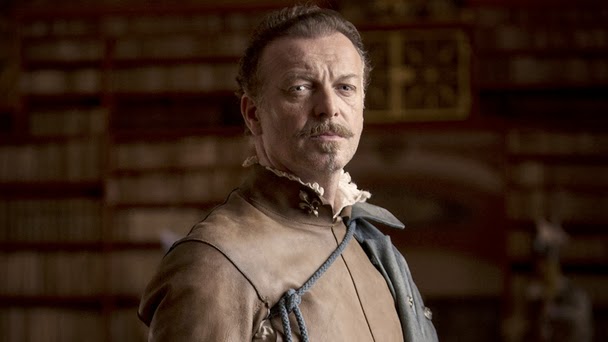 Musketeer week continues with two more interviews.  The Musketeers debuts Sunday on the BBC.
The first interview is with Hugo Speer who plays Treville.

What attracted you to the show initially?

I was very excited just reading the title really - The Musketeers is a wonderful story. Knowing it was written by Adrian helped an awful lot because he is a high-calibre writer and then just reading it, I thought it was brilliant. It’s the same old thing: any actor basically loves a good script and that attracts anyone really. Treville’s a great part, you know if you read the books then you’ll know that it’s a fantastic part and so all of those ingredients really.

What kind of research did you do once you’d got the script?

Just reading the novel again, it’s been many, many years since I’d read it last. I was always a big fan, having been brought up with the 1973 and 74 film versions you know with Oliver Reed, Michael York, Christopher Lee and Sophia Loren and all that sort of lot, so I knew that they were amazing films and I was only like five or six years old when I first saw those. But, they have kind of stuck with me and stayed with me all my life. So, as far as research goes, just re-reading the novel.

What do you think makes this version of The Musketeers fresh?

It has all the right ingredients. The young directors that they’ve brought on were always full of enthusiasm. I think the art department are incredible and the actors that they’ve brought on. I think it’s literally just everything about it that kind of gives it a real exciting fresh feel. I don’t think anything that has been done recently has been wide of the mark; this just feels more honest to the real sort of ethos of how Dumas wrote the novel. It’s seems like a good time to revisit it, but to revisit it honestly. I think certainly having seen the way it’s being produced and directed, it feels very pacey and I think that’s very exciting. You know it’s an exciting story but I think if told well then it just feels modern again.

Can you tell us a bit about your character, Treville?

He was effectively the first Musketeer. He was in King Louis’s court when they were kids. My father was a King’s soldier and he was his favourite solider, so when we were growing up as kids, Treville had access to the court and was able to play in the court with the young prince. So when the prince became older and when he became king it seemed natural for him when it came to creating an elite band of troops to act as his security and bodyguards and the like. It seemed a very natural thing to task Treville with that job - to be his number one left-hand man or right-hand or whatever it is, and also bring together the band of troops that became the Musketeers. Treville’s motto is loyalty and strength - that’s how he lives his life and that’s how he is in regard to the king as well.

What is Treville's relationship like with the other Musketeers?

He is like an older brother figure. I feel that there’s certainly a real love, respect and in some cases fear of Treville. Again, in the novel it mentions these three elements - love, respect and fear - and it says that to be these things is like the paragon of male virtue. There’s no higher accolade that one could have bestowed upon you. So that’s basically how the Musketeers see him. It’s fear, it’s love, it’s respect. It’s all those things. But I’d say that kind of like, more sort of fraternal way than anything paternal.

Does Treville still get his hands dirty when he needs to?

Certainly more towards the end of the series - his hands get dirtier and dirtier actually.

What is Treville's relationship like with the king and the cardinal?

With the king its undying loyalty. Occasionally frustrating because the king is an arse an awful lot of the time, but he does amuse me an awful lot. I think Treville gets a little exasperated with him sometimes because the loyalty he shows him I think he would like it fully reciprocated. He does make foolish decisions, but however I do find him amusing and there is that sort of love and loyalty there even though like I said I do find him occasionally exasperating.

What irks me I think is the fact that he has so much respect for the cardinal, who I know to be a low down snake in the grass. That I find very, very irksome - that the king holds him in such esteem and really makes an awful lot of decisions based on the advice of the cardinal. If anything, that makes my job an awful lot harder as well because I know the cardinal is always plotting and always planning all this skulduggery that invariably makes my job an awful lot harder. Plus, he’s got his red guards who are effectively our enemy. They shouldn’t be, but they’re our rival. We’re always duelling and scrapping with the red guards in the streets and in the bars and always brawling. My relationship with the cardinal is one of profound distrust, but occasionally I also have to work with him. We’re forced to work together, which makes things awkward. But my professionalism is something that has to overlook what I know about him. Sometimes I’ll lose my temper with him because I know exactly what he is and what he does.

It’s such a beautiful country. It’s great to be away from everything to know that you can just focus on the work. There’s a real romance to Prague itself, which I think kind of helps. The Czech Republic itself has all these incredible castles and gardens that the sort of government protected and maintained, which meant creating this world, or made it a lot easier to create the world of 17th-century Paris. The world of the Musketeers. The people themselves were very welcoming and very friendly, so it kind of made the whole experience a very happy and positive one. If you’re feeling that way, then obviously it’s a lot easier to do the work. If you’re enjoying your time there, it makes the job so much more pleasurable.

What do you hope the audience get out of the show week by week?

I hope they genuinely enjoy this fresh retelling of a story that I think most people are familiar with in the first place and also, for younger viewers, that they learn about these characters and love them and love the whole world and the whole history: just genuinely get caught up in this ﻿action adventure romance, which is kind of what the whole thing is. This is like story-telling at its best and that’s why we make these things - to give audiences a right rollicking piece of entertainment. I hope they just watch it and love it and keeping watching it in their droves.
Posted by DR5WHO at 1:58 PM