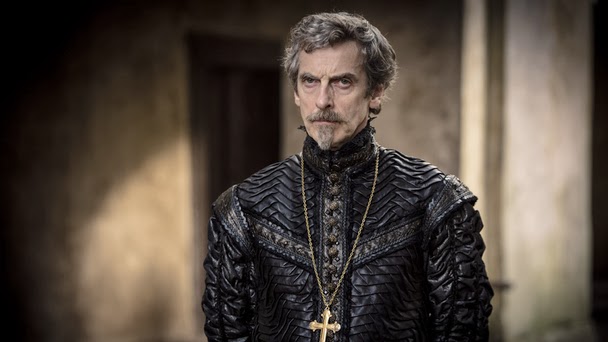 We finish up with The Musketeers interviews with the 12th Doctor himself Peter Capaldi playing the villain of this series Cardinal Richelieu.  He sat down with the BBC Media Centre to talk about his role in The Musketeeers which airs tonight on BBC One.


How would you describe your character in The Musketeers?

Cardinal Richelieu is protector and confidant of the king as well as being essentially the first minister of France. He runs the country. He is a military figure as well as a religious and political one. He has a network of spies and operates like an illegal secret service to pursue his ends. He is by nature Machiavellian.

Did you do any research for the role?

I read the book.

How does the drama series differ from the book?

There is an expansion of the world and characters beyond that of the book.


Do you have any anecdotes from set?

The production suffered from a lot of injuries: dislocated shoulders, bruised shins, the odd concussion. It's one of the occupational hazards of being a swashbuckler. I myself suffered a nasty dislocated thumb, but embarrassingly not from swinging a sword around. Instead, my injury came from a domestic the cardinal was having with Milady, Maimie McCoy. I threw her against the wall not realising I'd caught my thumb in her large frock. I felt a jab of pain. And when the director said "cut" I looked down and saw my thumb was on the wrong way round. Nasty. Instinct took over and I shoved it back. Which made my eyes water and my knees weak. The lesson clearly was, never get into a fight with Maimie McCoy.

How would you have coped living in the 17th century?