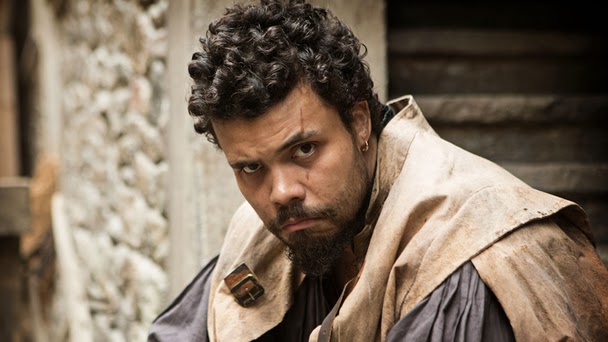 Its Friday we we are down to the last three interviews which will conclude on Sunday.  Today we head for the home stretch with Howard Charles who talks to the BBC Media Centre about playing Porthos.

I thought the writing was brilliant - that was one of the main things. It was the best thing that I personally had read in some time. The character of Porthos is amazing. I spoke to Adrian Hodges, the lead writer and executive producer and he mentioned that he wanted to pay homage to Alexandre Dumas Senior (the father of the novelist) with Porthos by using some elements of the novel, but also from the personal history of Alexandre Dumas Senior - a soldier in the French army who rose to the rank of General, when there weren’t many mixed-race people around in uniform, so of course I was really attracted to that element.

Instead of the fat, drunk gambler, he wanted to make Porthos a true warrior in the group, paying homage to such a great figure in history. That was hugely attractive to me. Porthos is someone who enjoys life to the full because he knows the value and fragility of it. He was born in darkness and found the light. Becoming a musketeer is very much the zenith of his attainment. It means everything to him. Adrian has really captured that and allowed me to play with that I always read the source material and I love what Adrian added to that, the way he has made it his own and his fearlessness in collaboration.

Apart from reading the source material, what preparation did you do for the part?

Well another thing that I read was a novel called The Black Count, which was all about Alexandre Dumas Senior’s life, which really helped because it gave me a way in, a hook which I could marry with what I could already bring to the table. I also felt a tremendous sense of responsibility to the General.

As far as the boot camp went, I didn’t realise how essential it was until we started shooting because from day one myself, Santiago, Tom and Luke were sweating and panting together. So straight away, there was a deep level of respect because you were standing next to other guys that were also finding it challenging. There’s nothing better to bring everyone down to the same level than doing 100 press-ups. From virtually the first moment we were a unit and we had to be a unit and we had to work together - with the sword fighting and the horse riding. As well as an individual challenge, it was also a collective challenge. We just built this camaraderie and we took that on to set. Whoever’s decision it was to have a boot camp - I think it was Colin Wratten, the producer - it was time well spent.

Tell us a bit about Porthos and maybe just a little bit about his back story and how we meet him in the series?

"A gargantuan figure blessed with the greatest lightness." My character grew up in the Court of Miracles, which is the 17th-century version of the modern-day ghetto. There were 12 in Paris and the one I grew up in was the biggest and the worst. I don’t know who my father is, my mother died when I was five, so then I basically had to fend for myself. Got into trouble here and there, I was a street thief, you know, a hustler of sorts. But also a romantic, someone who was in need of a family unit and love. The reason why the musketeers regiment is so important for Porthos is that it is the only family he’s ever known. There’s an amazing amount of passion and pride for Porthos in being a musketeer. The Fleur De Lis that he wears on his shoulder guard means the world to him. That brotherhood.

Fraternity, loyalty, equality - those things are very important to Porthos.
I liken Porthos to a human hurricane - on the inside, the eye of the storm, you'll find peace, serenity, beauty... cross him or those he loves, the Musketeers, and you will find yourself in a tempest of discomfort.

Does Porthos have some special skills that set him apart?

I have special skills that split people apart. Hehe. Like all the Musketeers, there is a talent for survival and finding a way to be victorious. Porthos has a warrior’s mind - a kind of sixth sense and an appetite for combat. Living on the edge, feeling alive. In my introduction to the series, a red guard draws a sword on me and wants to have a duel and I actually use a fork to defeat him when he prevents me from getting to my sword. That's Porthos. He IS a weapon. It's that warrior’s mentality.

How important was it being in the Czech Republic? What did it add to the show?

Well the Czech Republic is a beautiful country with an immense amount of history. Most of their hundreds-of-years-old architecture and infrastructure still remain today so it's like stepping back in time, which of course lends itself to playing the part of 17th century Paris/France. Just being in Prague alone, we walked over bridges that were 600 years old, and filmed in places that were 300, 400 years old and then some. So as an actor you get a lot for free, you get a hell of a lot for free because you’re in it. It's real. You’re wearing your armour, you’re wearing your uniform/costume. You’ve got your swords which are real, you’ve got the guns... everything is real, apart from the fact that the guns fire blanks. You’ve got hats, you’ve got horses and you look around and you’ve got these beautiful castles and palaces which are hundreds of years old and it’s very easy to suspend your own disbelief, which will in turn help the audience to suspend theirs.

What do you hope the audience get out of the show when they’re watching it?

I hope they’re entertained - I’m sure they will be. I hope the audience gains an insight into the worlds within the world we’ve tried to create for them and take something human from that. There are a lot of core values and universal topics that we explore. The themes of betrayal and honour, heroism and love. It's a series where good ultimately finds a way through because the heroes of the story never give up the fight for liberty, fraternity and equality, no matter how broken down their horse.
Posted by DR5WHO at 10:10 AM