Is Johnny Depp In Line To Play Doctor Strange???? 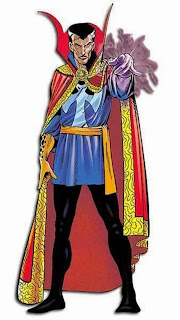 Den of Geek among other sites like CBR and Newsarama have been reporting that it is rumored that Johnny Depp has met with Marvel Comics to discuss playing Doctor Strange for Phase Three of their movie franchise.  Doctor Strange is one of the more mildly popular characters who is getting a resurgence of popularity as he is know a member of the Avengers in the different comic books based on the team.  There won't be an announcement right away as Marvel has claimed that any wave three announcements won't happen until the summer probably at San Diego Comic Con in July.

I hope the rumor is true as Johnny Depp can bring that type of odd ballness to the character that is kind of odd in a mystical way.
Posted by DR5WHO at 12:53 PM