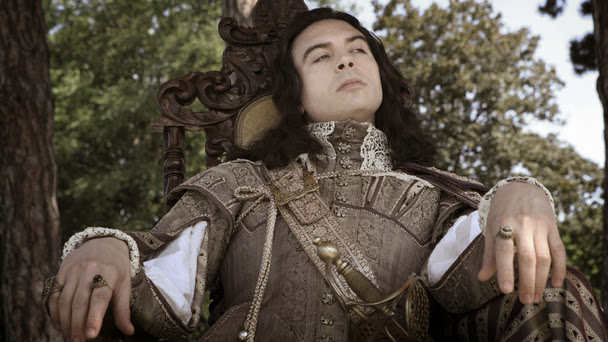 It is Musketeers week at the Galifrayan Gazette and the BBC Media Centre has a slew of interviews with the cast. Today we bring you two interviews who play the royalty of the show the king and queen. So first off we bring you the Ryan Gage who plays King Louis.

Well I thought that the writing was very, very good. I loved the script. That was definitely what first attracted me. The character of Louis was the character I auditioned for as well and I thought he seemed like he would be great fun to be. I’ve never played somebody of such high status on television, but I have done it in theatre. He seemed like a character full of contradictions who was able to go from being emotional to being humorous to everything in between. I found that very appealing and challenging and exciting.

What sort of research did you have to do when you knew you were going to be playing King Louis?

I read The Three Musketeers, the Dumas book. The historical Louis is rather different to our Louis though, but I still do sort of dip into biographies of Louis XIII and have found some to be helpful. I’ve watched a lot of drama around the period. I watched all the previous Three Musketeers films, which were all very good and that sort of thing really. I’ve played kings before and so started to remember what was useful about playing them. It’s nice when you play characters where you can draw on previous research.

What do you think were the big differences between the real King Louis and the fictional one in The Musketeers?

He’s certainly perceived in history to be a weak king and that is sort of Dumas’s doing really. There’s a suggestion in one biography that he actually wasn’t weak at all and that he was on the front line of a horse fighting his own battles. The historical Louis is sort of up for grabs as well really, so we haven’t worried too much about it, we’re sort of creating our own Louis. We’re taking many sort of fictional liberties, but hopefully creating a fun series, a playful Louis XIII rather than an historically accurate one.

Could you tell us about Louis and just a little about his back story in this re-imagining of The Musketeers?

Louis has basically had his own mother attempt to steal his throne, so psychologically he is very damaged and his father was assassinated. There was this very competitive court life, where people like Cardinal and his own mother and many of the courtiers are ruthless and brilliant politicians. So psychologically, he’s had to deal with a lot of trauma and responsibility. I think Louis has sort of dealt with that by not dealing with it really, and has to rely on a lot people.

What is his relationship with The Musketeers?

It’s well explored in the series. I think in the beginning he doesn’t really know them individually. He sort of recognises a familiar face, but knows Hugo’s character because he is the chief guard essentially. Different adventures happen, basically every one of them saves Louis's life or the queen’s life at some point, so that’s how the personal relationships develop. By the end of the series, he is on first name terms with all of them, and you can see the beginnings of the relationship.

Very few people get to see the cardinal up close like Louis does. How would you describe their relationship, the king and the cardinal?

I would describe it as complicated. I think the cardinal has Louis’s best interests at heart - or rather he has France's best interests at heart and he thinks that Louis is probably the safest option to keep France as stable as it can be when there is so much political friction and so much discontent and so many outside pressures in terms of competing empires. I also think Louis is very useful to the cardinal because the cardinal is so brilliant and Louis is not as brilliant. But he is easily manipulated by someone and wants the cardinal’s brilliance, so he is a useful pawn. I think Louis is pretty safe in the cardinal’s hands, but who knows? You couldn’t really completely trust him, but I think Louis has to and sort of does.

What was it like acting so closely with Peter Capaldi?

It was a joy. He became a very, very close friend. We were in practically every scene together, so we spent a great deal of time together. He is a very funny and extremely wise and sensitive, interesting person. We still occasionally send each other humorous text messages. Working with Peter Capaldi will be treasured and I hope to do it again soon.

Just finally, I wanted to get your insight in what you hope the audience gets out of the show week by week?

I hope the audience will primarily enjoy themselves. I think it’s a fun show. I hope they’re gripped by stories and charmed by the characters or repelled. I hope they come along for the ride. I think it’s a good show, we’re all very proud of it.
Posted by DR5WHO at 10:12 AM