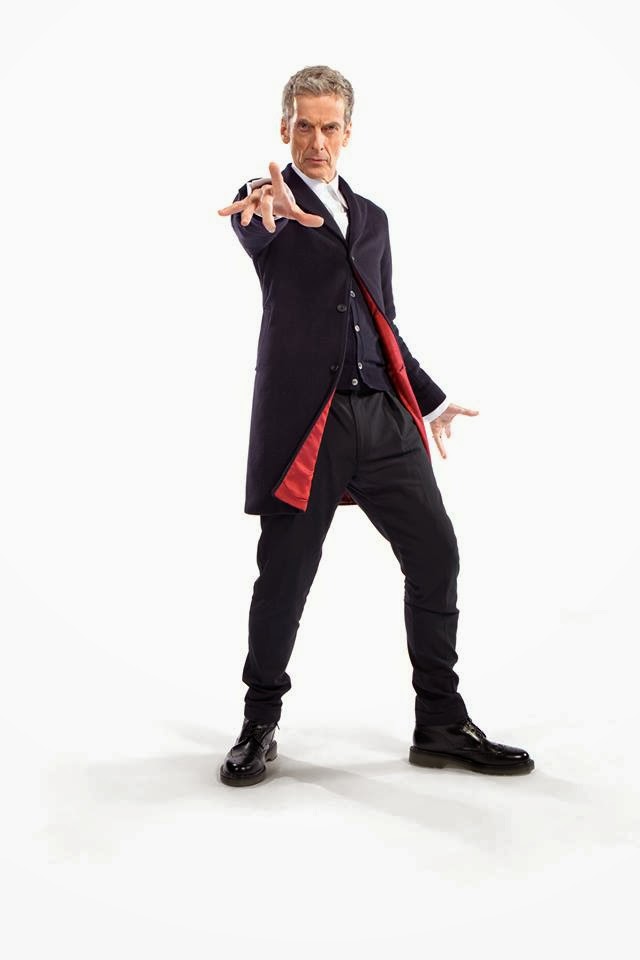 The BBC and Doctor Who Producers have revealed to us what the 12th Doctor Peter Capaldi will be wearing during Series 8.  So far we have only seen him in Matt Smith's costume and in filming pictures in a Victorian era nightshirt. So here you have it at long last what Peter Capaldi is wearing as we have something that looks similar to Matt Smith but with a Hartnell/ Troughton type of style thrown in but definately reminds me of Pertwee.

So let us know if you like it or hate it as it will sure take some time getting used to it but at least we know what he is wearing and I like it so far.

A brand-new era of Doctor Who begins as the Time Lord dons a new look. Each incarnation of the Doctor has his own original style, and BBC AMERICA has just released the first photo of the Twelfth Doctor’s costume. Sporting a dark blue Crombie coat with red lining, dark blue trousers, a white shirt as well as black Doc Marten shoes, the look was created by Doctor Who costume designer Howard Burden. Commenting on his costume, Peter Capaldi said: “He's woven the future from the cloth of the past. Simple, stark, and back to basics. No frills, no scarf, no messing, just 100 per cent Rebel Time Lord.” While lead writer and executive producer Steven Moffat added: “New Doctor, new era, and of course new clothes. Monsters of the universe, the vacation is over - Capaldi is suited and booted and coming to get you!” This new look will be featured in the series when Doctor Who returns to BBC AMERICA later this year. Filming on the upcoming season, which also stars Jenna Coleman (Death Comes to Pemberley) as companion Clara, is currently underway in Cardiff.
Posted by DR5WHO at 2:07 PM