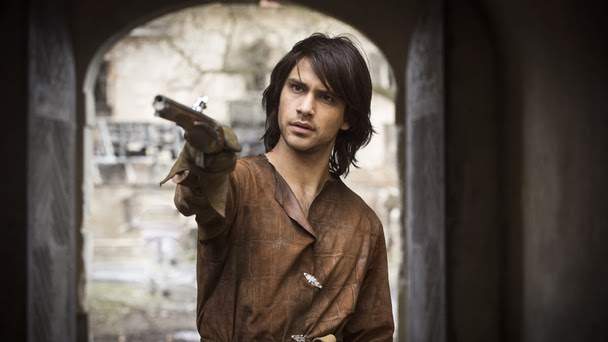 We are on our penultimate interview with Luke Pasqualino as he talks to the BBC Media Centre about playing D'Artagnan in The Musketeers.  The Musketeers airs tomorrow at 9PM on BBC One.


What attracted you to the show?

First off, it’s definitely the fact that it's The Musketeers - something I used to watch when I was a kid - Dogtanian and the Muskehounds and all that kind of stuff. I knew the story and the characters so the fact I was able to go in with the feeling I understood the premise was a big attraction. Just to be involved in a BBC drama was great. In my opinion, the BBC are one of the best producers of drama in the world, and it made me incredibly happy to get the opportunity to be one of the leading men in one of their productions.

Did you have to do any preparation in the lead up to the role?

Not really - the only bit of prep I did was watching some of the previous films, for example the Dick Lester one, the one with Charlie Sheen and Kiefer Sutherland, the 2011 one with Logan Lerman. I did that TV research just to see what other people had done and how the Musketeers had been portrayed.

Tell us a bit more about the Boot Camp

Well, we stayed in a castle for a week outside of Prague, and it was literally a boot camp! There were fitness tests, getting up at stupid o'clock in the morning, horse riding for two hours, coming back to do two hours of sword fighting and then a short lunch, then repeating the horse riding and sword fighting after lunch - it was non-stop! It was the most valuable week of the shoot really - it put us in great stead for the rest of the show and kind of gave us a head start really.

Tell us a bit about D'Artagnan

Well Tom, who plays Athos, said a great thing to me the other day which was that each of the Musketeers has their own compulsion, and D'Artganan's is definitely that he has a very impulsive nature. One of the notes I was given before filming was that they really wanted to play on the fact that he had a very hot head - so I tried to put that out there. He is a desperate romantic at heart as well, so it’s trying to balance those characteristics. I really enjoyed that.

Were there any specific storylines you particularly empathized with?

The relationship he had with his father is a huge thing for me - me and my dad get on like a house on fire - we are like best friends. I drew on that - so when D'Artagnan’s father dies I was just thinking about what it would be like if my own father passed away - it would be hugely difficult for me. But really it was the friendship and loyalty - I'm from an Italian background so those ideals are written in stone. I tried to push that out as much as possible.

How did your relationship with the other Musketeers evolve through the shoot?

It went from strength to strength. I met Howard before we even started filming in a costume fitting, so we knew each other. When we got to Prague for boot camp we all went out for dinner together and then went out to a few bars. The boot camp was great for us to go and get all the technical aspects right, but also for us to bond and become friends. You take that energy on set - it really works - and that's evident in every episode really.

What did filming in Prague add to the show?

Its absolutely vital - to do something like this in England would never have worked. I was completely over the moon when I got told I was going back to Prague - I know how beautiful it is after filming there last year. I loved it to bits!

What do you hope the audience is going to get out of the show?

I hope the audience takes it for what it is - I don’t want them to think this is anything like the way The Musketeers has been portrayed before. I think we have a very different vibe to it - the fact that we are actually using muskets for example. It’s not a fairy tale, that’s not what we are making, it’s very true to life. The Musketeers on one side are trying to fight with their loyalties and their passion about being a musketeer balanced with their own personal compulsions, be that women or gambling. They have to balance that whilst still having a duty to protect the king no matter what’s going on in their own lives. They have to do what is right no matter what, and I think that is a really cool story and message to tell the audience.

If you could sum your character up in one word, what would it be?

Impulsive... passionate - there’s so many I could give you a list!
Posted by DR5WHO at 8:27 AM