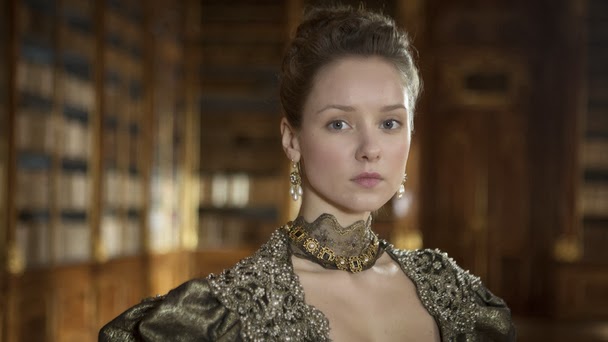 It is Musketeers week at the Galifrayan Gazette and the BBC Media Centre has a slew of interviews with the cast. Today we bring you two interviews who play the royalty of the show the king and queen. Second Interview we bring you is with Alexandra Gage who plays Queen Anne.


What attracted you to The Musketeers?

The script was so action-packed and obviously the story is quite well known, the original. It was still the original characters, but the story was fun and the script was up to date and had a kind of modern feel to it. I just could tell that it was going to be a great family show and it would look great.

Can you tell us a bit about your character and who you’re playing?
My character is Queen Anne and she is married to Louis the King. She’s still quite young and even though they’ve been married for 10 years, they got married when they were basically children and so she’s still feeling her way in court. Although she’s got all the trappings of power, she has quite little power in real terms because the cardinal is there controlling everything and he’s also quite wary of her because she’s originally from Spain, who France are on the verge of war with. She has a bit of a hard time as well because she’s in this relationship with Louis, who’s quite a difficult sort of character, and they don’t really have a romantic relationship at all. They’re more like brother and sister and she has a lot of pressure on her to be expected to have a child, an heir to the throne and she’s not yet been able to do that, so at the start of the show she’s in a difficult position. But she handles everything with a lot of grace, whilst still remaining quite strong willed.

What do you think is so appealing about the genre?

I think this is different from the other period stuff out there, because it’s got this kind of chivalric romantic feel about it, but also a sense of fun. It’s a bit wittier in a way than some of the drier, heavy period dramas that you see on TV.

I think what’s attractive about period drama is the different worlds and the characters there who are sticking up for what you believe in.

You did quite a lot of scenes with Peter Capaldi. What does he bring to that role of the cardinal, which is such an infamous role in history and in the films of the past?

It’s just such brilliant casting I think. I couldn’t imagine anyone else doing it now. He is the ultimate cardinal in my view. When he is acting as the cardinal, he oozes this kind of sinister quality and it’s brilliant. He was just fascinating to watch and a lovely man to work with. I couldn’t say enough good things about him really.

What’s Anne’s relationship like with the Musketeers? How does she first meet them and how does that progress throughout the series?

Well Captain Treville is in and around quite a lot in court - he is one of Louis’s right-hand men, so she’s quite familiar with him. I think symbolically for her, they represent a kind of adventure, a kind of romantic adventure that she isn’t able to experience living in court and being stifled by kind of all the obligations of being queen. The values that they stand up for, like bravery, honour and social justice are all things that she supports and I think she trusts Treville in a way that she doesn’t trust the cardinal. When the cardinal and the Musketeers come to blows she’ll always be on Treville's side.

What did filming in the Czech Republic and being there bring to the story?

Yes, I can’t imagine where else we could have done it now. There were amazing locations, I was wowed every single day I went on set basically, and it was nearly always different. There were obviously a few rooms that were used again and again, but I was so surprised by how many different locations there were. They just seemed to be endless. It looks epic and completely of the time and it transports you to that world. You’ve got the gritty kind of tavern scenes and fighting scenes with the boys. Then when you come to court, you’re really in court and you feel that I think from the location.

It’s fair to say you got some of the most elaborate costumes. How did that help you get into character?

Yes, hugely. Because you just wouldn’t have a clue what that feels like to be wearing that sort of thing every day, which is what it would have been like. There are corsets and huge, heavy dresses with masses of layers. So in terms of how it makes you feel when you’re in it, you do automatically feel different. You have to hold yourself differently. But also, the sheer elegance of the material and all the details is a constant reminder that you were the highest class. You were one down from God essentially, as ruling the country.

And just finally, what do you hope the audience gets out of the show?

I hope they have a really good time. I hope they really grow to love the characters because I think they’re all hugely loveable, villains as much as the heroes. I think, well I hope that they engage with the through-line of the characters and obviously each story, each week has got a really great story and they have fun watching it and they laugh. But I hope they also engage with the roots for the through-line of the characters, you know the romantic backgrounds of all the characters where they’ve come from. I think that’s been well crafted into the script in a quite detailed way. I hope the audience pick up on those things and it makes it more enjoyable for them.
Posted by DR5WHO at 10:23 AM