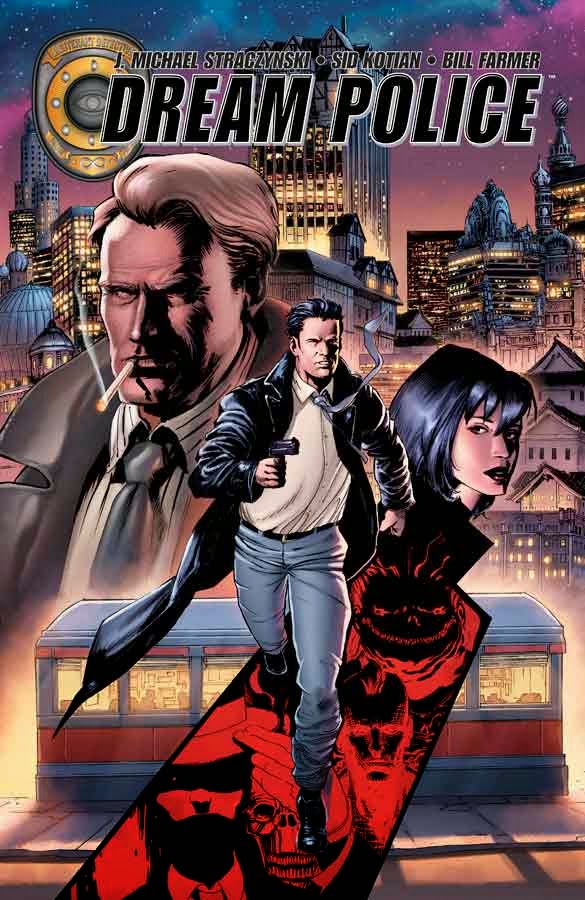 The man who brought us Babylon 5 now brings us another science fiction comic and no it isn't the song from Cheap Trick but it does have some similarities.


DREAM POLICE IS A MYSTERIOUS, FANTASY SERIES SURE TO INTRIGUE READERS
Crime, changelings, nightwalkers, and police detectives that uncover more than they bargained for


Join Dream Police Detectives Joe Thursday and Frank Stanford as they patrol the dreamscape in DREAM POLICE, written by J. Michael Straczynski (TEN GRAND, PROTECTORS, INC.) with art by Sid Kotian.
Joe and Frank have been partners for as long as they can remember, patrolling the alternate universe of dreams, nightmares, and the great void beyond, an alternate but very real dimension of changelings, echoes, wisps, ethers, and nightwalkers, those that died in their sleep and wander the dreamscape forever.
The Dream Police have seen it all. But when Frank steps away and disappears… and the woman who returns says she’s Joe’s partner, that she’s always been Joe’s partner… he begins a journey into the unknown that will shake the dreaming down to its very foundation.
While growing up, Straczynski moved 20 times by the time he was 17. This lack of continuity as a child led him to imagine his own “hometown,” a community that he patched together with different memories from all the different places he’d tried to settle, and visited only in his dreams. “I've been fascinated with the idea that the dreamscape is a real place, stitched together from echoes of the physical world, where we go to find some measure of relief, or adventure, or understanding,” said Straczynski. “If that's the case, then there has to be some means of providing order and protecting dreamers from danger… which led me to the notion of the Dream Police.”
DREAM POLICE is more than just a crime series. Each issue does world building and allows readers to get to know more than just the police that inhabit the dream community. “The book delves into the other characters who live in the dreamscape,” said Straczynski. “The architects (who design environments on the fly as needed by dreamers), changeling and echoes (who play the parts of people we know), nightmares (figures both frightening and deeply tragic) and others who serve a higher power.”
The first issue of DREAM POLICE arrives in stores on 4/30 and will be available for $2.99. Cover A (by Sid Kotian & Bill Farmer) can be pre-ordered using Diamond Code: FEB140494. Cover B (by Renae Deliz & Ray Dillon) can be pre-ordered using Diamond Code: FEB140495.
Posted by DR5WHO at 2:39 PM