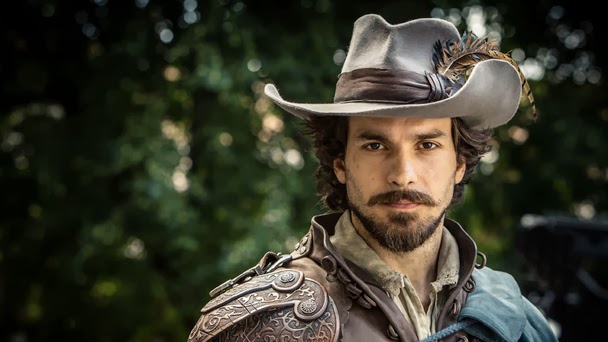 We continue with The Musketeers interview with one today with another of the The Musketeers.  This time it is Santiago Cabrera who plays Aramis who talks to the BBC Media Centre about the new series premiering Sunday.


Can you tell us a little about your character?

I play Aramis, who is one of the king’s Musketeers, who D’Artagnan meets in the first episode. He has got that Joie de Vivre, he is someone who relishes life, loves what he does and lives life to the full. He is a daredevil but also, like the other Musketeers, he can be a very lonely character.
The Musketeers are sacrificing a normal life to do what they do – fight for the cause, the king and France. He is definitely a lover of women – he has a lot of romances – and with that has some really interesting storylines in the first two episodes. He is introduced to Adele, the Cardinal’s mistress, so he likes going into dangerous territory.

Can you tell us how we are first introduced to him as a character?


D’Artagnan is out to get revenge for the death of his father and he thinks one of the Musketeers is responsible so confronts Athos at the garrison, but we are all there. We meet this young man, and can tell he has skills, because we see Athos who is an amazing swordsman and this young country boy who can hold his own against him, so immediately we can see something in him.

What’s great about this script and what I loved about it the first time I read it is that even though the Musketeers are such a group, and known as a unit, they are introduced as individuals really well so we really get to meet them as separate people before they come together – that’s really clever. It’s all related to the story and its really quick paced – it was a real page-turner – I read the script really quickly which I think is always a good sign.

So is the script what attracted you to the show?

I think so yes - I loved Aramis’s spirit and the fact he was a fun-loving character – I knew I could have fun with it. And also it’s potentially something you could be doing for a really long time, so when you have a way in and something about the character to grab onto, it makes it really enjoyable – there was definitely that with the script. And all the Musketeers are a bit mad – that’s definitely in the book – but they are also noble characters. They have to always stay between two lines in a way because even though they are our heroes they are flawed, but each one makes up for the others' flaws. Together, they would make up the perfect hero, but for each Musketeer their own personality gets in the way which is what gives it a fun side as well. There is a lot of fun and humour in it which is brilliant.

So who is the biggest daredevil?

I think they are all daredevils in their own way, but Aramis is definitely someone who doesn’t have a filter in many ways, he sometimes just sticks his foot in it – for example Constance (Tamla Kari) slaps him in the first episode. He doesn’t really have a sense of danger.

Today I think Aramis would be doing parachutes and bungee jumps and extreme sports. That’s part of being a Musketeer, living life to the full – confronting death. When I spoke with Adrian Hodges, the writer and creator, when he pitched the show and I was auditioning he said something I really loved – that is was the time where things were about to change in France and the Musketeers lived a life where they had authority. They were like policemen or top-end security; they could do whatever they want and have a boss in Treville who lets them do what they want. It was a time in France where they knew it was a lifestyle that was about to end, so they are living life to the full. That’s definitely one of the elements of Aramis, he is enjoying it for as long as he can because he knows this lifestyle can’t go on for ever.

You said earlier Aramis is a bit of a lover – what can you tell us about his relationships in the series?

Aramis is a very spiritual person, in the book he is very Catholic and is a man of God – he was brought up to be a priest. A lot of people were. He realised early on he loves women too much, he loves to fight, loves the flesh and things that don’t go hand in hand with being a priest. He still has a strong belief, but he isn’t a hypocrite and he would hate people that are. He has a lot of respect for people who live what they preach, but in those days to see people like Cardinal Richelieu, it was very easy to be two-faced in religion.

How do you prepare for a role like this?

The first thing I did was read the book and then just underline what I thought I liked and could be relevant and ignored the rest because we are doing a completely new take on it. I think the spirit of the book is something we have really captured and you can’t get away from that really.
Then it’s the training – we had boot camp which was very helpful. That was a whole week which was very full on. We did horse riding, sword fighting, and combat. It was also keeping fit all the way through – you had to do a lot of stretching because with the kind of stuff you were doing like getting on and off horses then going straight into sword fighting, you can get really tight so you have to stay in the zone.

You said he likes a fight. Have you done all your own stunts?

Yeah we have actually. We have great stunt guys – they come up with really fun choreographies and cater to the character. Something I found out early on with Aramis is that he really relishes in everything he does, even if that is just chopping wood, he is loving the idea of just swinging the machete and chopping it – they really picked up on that.

What helps you get into character?

Putting on the gear definitely helps. I think every job is different, you know? I’ve done jobs where I’m literally in my trailer, then I go from the trailer to the set in the zone, but here the way we relate to each other helps, we have a lot of fun between takes, the four of us. Certain scenes require quite a bit more concentration so you make sure you have five minutes to think – but in general it’s really about the banter between us. The more you do it, the more the character gets engrained in you and its finding those variations, it’s a long story over 10 episodes, and what’s great is that you get new material, so you get to bring different colours to every story, because in a way they are very complex characters, they have got so many different facets to them, so hopefully it just keeps surprising and you see new sides of the characters – that’s what will keep it fresh.

What’s been your most challenging scene to film?

Probably fighting in the heat. We have had some days of 35 or 36 degrees fighting in the leather costumes – running up and down and doing these pretty elaborate 45-second to one-and-a-half-minute fights, which require really intense bursts of energy, like a sprint. Doing that over and over again in the heat – we had to have ice packs and fans. In a way you are in this zone where you can’t really think too much, which is kind of helpful. We rehearse those fights a lot – we get a couple of hours a week before and try and fit a couple more hours in as we lead up to the fight, so by the time you get to do it on set you can really do them on autopilot and can really bring the characters into it, bring the story in and bring them to life.

How have the four of you got on together?

We got on great from the get go – even when we met in Prague. Colin the producer took us out to dinner with Toby the director and there has been a lot of that because we were all in the same building. We get together a lot, cook for each other – well Luke is more the cook so we were always all over at his place, or I had people over and we would then go out for dinner. We really related to the guest stars too and had a great time with them when they came out.