Could Sherlock Be Returning Later This Year???? 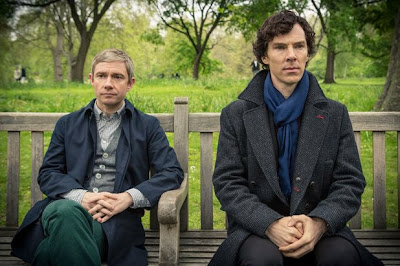 Now this is good news for Sherlock fans as it was two years before we finally got the show back to answer how Sherlock faked his death.  The downer to this story is the availablity of the two stars Benedict Cumberbatch and Martin Freeman.  The show started filming in March of 2013 for a January 1st airing so it is possible to do it but it all hinges on the stars.  All you have to do is look at how many movies Benedict Cumberbatch does and you can see the problem with this.  Of course it could be feasible and a reality since Steven Moffat and Mark Gatiss already mapped out Series 4 and 5 already.

Another roadblock is that Doctor Who will be filming and the summer is usually when they film the Christmas special and with the two shows going on at the same time could this dampen the quality of the two shows?  Well time will tell and hopefully the wait for Sherlock series 4 is less than the wait for series 3.
Posted by DR5WHO at 1:48 PM