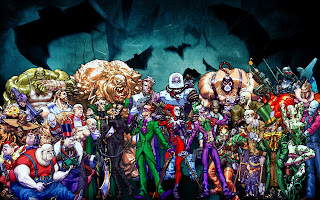 Fox has announced that the new Gotham show will not only just feature Commissioner Gordon but will also feature a 10 year old Bruce Wayne.  Obviously this story will be taking place in the days following the murder of the Waynes.  So I'm guessing Alfred will be featured in the series also but that is only speculation on my part.  It was also confirmed that The Penguin, The Riddler and Catwoman will be featured and we will see the events that shaped them into the villains we know today.  Here is what  Fox Chairman Kevin Reilly had to say about Gotham and the villains.

"The show will track Bruce from a child (around 12-years-old) until he puts on a cape in the finale. We will see how they get to become what they are as Gotham is teetering on the edge"

Email ThisBlogThis!Share to TwitterShare to FacebookShare to Pinterest
Labels: Gotham